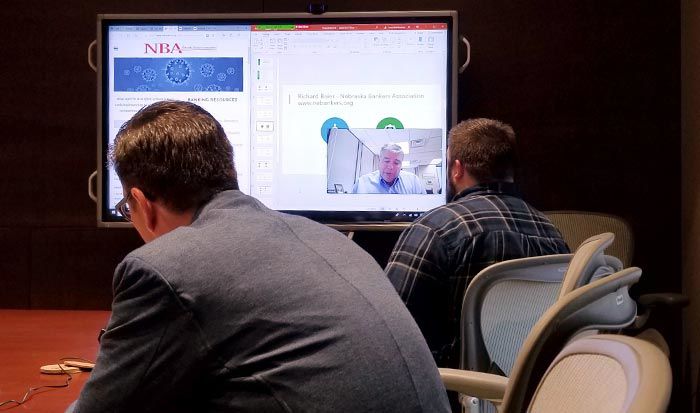 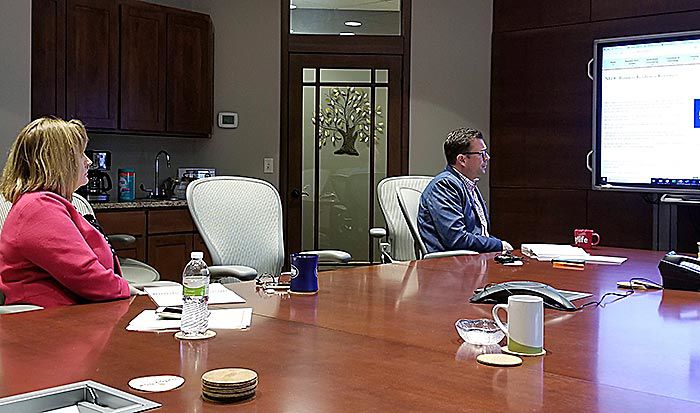 About 150 people tuned into a virtual roundtable discussion held by the Norfolk Area Chamber of Commerce and the City of Norfolk on Tuesday morning to discuss how the COVID-19 pandemic is affecting businesses in the area.

Norfolk Mayor Josh Moenning and Denise Wilkinson, Norfolk Area Chamber of Commerce president, welcomed 13 speakers from various organizations representing state and local government and private organizations that have been reacting and attempting to overcome the problems.

All of the speakers and attendees accessed the meeting remotely. A few select attendees, including a Daily News reporter, were permitted to attend in person.

The scheduled presenters mainly took the opportunity to reassure the public and business owners that they are remaining open, although their doors may physically be closed in many cases, and helping those they are able to in the wake of the pandemic.

Among the highlights of the conference, which lasted nearly an hour and a half, included:

There was an update about the Nebraska Department of Labor’s efforts to help struggling employers and unemployed workers.

Becky Maggart of the state department of labor said many businesses are seeking help through short time compensation (STC), which is a supplemental payment program that is part of the department’s unemployment insurance program.

“STC helps the employer retain the workforce during a temporary slowdown,” Maggart said. “Employees are able to receive supplemental unemployment benefits to help them offset their loss of income.”

Maggart said a governor’s executive order also has significantly loosened the requirements for unemployment benefits in the state.

Through May 2, anyone filing for unemployment does not need to be searching for work, an unpaid waiting week has been waived and charges to unemployment insurance tax accounts are waived as well.

Maggart said the department’s changes to unemployment and STC benefits would apply to both full-time and part-time workers, as well as minors. However, because of the number of businesses and individuals filing applications related to unemployment and STC, the wait may be as long as six weeks before a claim is accepted.

Several speakers said they are awaiting a federal stimulus bill that is being debated in Congress to see what the next steps will be.

“They’re working on a stimulus package (in Congress), and there’s going to be a lot of stuff in there through the (U.S. Department of Agriculture) Rural Development, through (Housing and Urban Development) and through the Economic Development Administration,” Higginbotham said. “As soon as that gets passed, we’ll be looking at that, and hopefully they can get those dollars out quickly.”

“Primarily additional staffing resources, additional personal protective equipment for our health care industry and some other costs related to testing, cleaning of supplies, those sort of things,” Hassebrook said.

The Legislature also authorized $25 million in unobligated reserves, Hassebrook said, that may be tapped into at the governor’s discretion.

Timothy Arlt, vice president and general manager of NPPD’s retail division, said the power supplier is suspending all shutdowns of electricity due to nonpayment of bills.

“That should provide some relief to those who are experiencing difficulty in making payments during this time,” Arlt said. “We would encourage customers to call us and have a conversation about making payment arrangements.”

Arlt said NPPD is not expecting any service interruptions throughout the pandemic.

“Typically we have to deal with the physical damage to the system,” Arlt said, “whether it’s ice, flood, snow. This is a silent type of attack. This is a different type of environment for us, but we are prepared.”

NPPD service teams are sequestered and isolated so they can remain healthy to deal with any outages. Although all of NPPD’s physical offices have closed, Arlt said, its call center remains functional.

Juan Sandoval, a volunteer with the SCORE Association, said his organization has bilingual staff members to assist Spanish-speaking business owners.

Moenning gave an update on the availability of the internet throughout Norfolk as many residents choose to stay in isolation.

He said although the public library remains closed, free public Wi-Fi may be accessed on the premises without needing to enter the building.

Dan Spray, chairman of the chamber board of directors, said his business, PrecisionIT, on Fourth Street and Braasch Avenue would offer free public Wi-Fi in the business’s north parking lot.

A full recording of the roundtable will be available online later this week.

Here are some places to call or visit to find relevant resources for dealing with the COVID-19 pandemic, as recommended by representatives of various organizations at the Norfolk Area Chamber of Commerce’s virtual roundtable Tuesday morning.

Centers for Disease Control and Prevention

About 6,500 athletes who already have earned their spots for the Tokyo Games are in for 2021 under redrawn qualifying regulations published Tuesday by the International Olympic Committee.

A sixth grade student from Pierce Elementary is making a difference by creating face masks for her local community.

Portia de Rossi has been teaching herself how to cook during the coronavirus lockdown. It’s been an eye-opening experience for the actress — and for her fans.

WASHINGTON (AP) — Senate Democratic Leader Chuck Schumer is calling for up to $25,000 “heroes” pay for frontline health care and service industry workers, as Congress pushes ahead with a new coronavirus crisis rescue package.

Salvation Army helping those in need during pandemic

In the weeks since the coronavirus pandemic began, there are more people who need a little extra help keeping their families fed and healthy.

Patti Gubbels is running for a seat on the Nebraska State Board of Education in District 3, a position held by Rachel Wise.

About 6,500 athletes who already have earned their spots for the Tokyo Games are in for 2021…