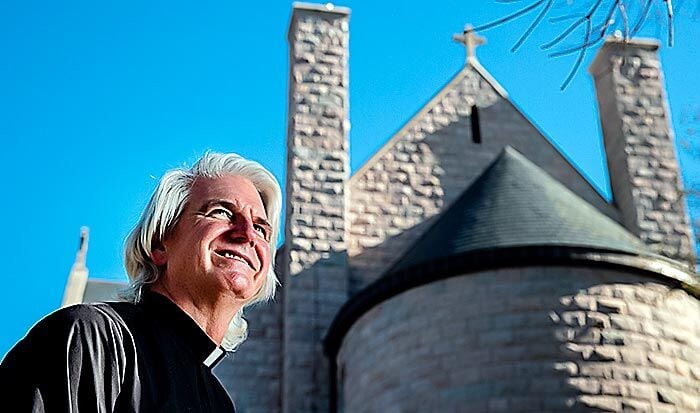 Fr. Dave Korth poses for a portrait in front of Sacred Heart Church Wednesday, Nov 4, 2020, in Omaha, Neb. Korth decided on a whim to not cut his hair until a vaccine was developed for the coronavirus. 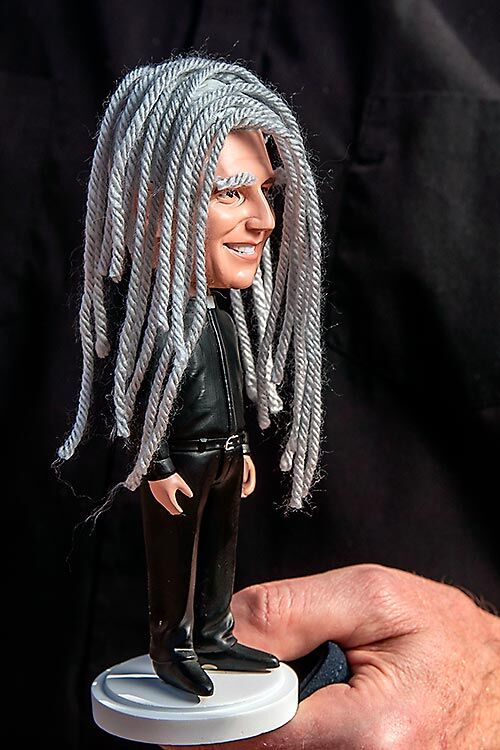 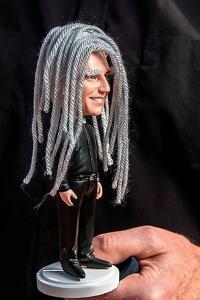 Fr. Dave Korth holds a bobble head that someone added hair to Wednesday, Nov 4, 2020, in Omaha. Korth decided on a whim to not cut his hair until a vaccine was developed for the coronavirus.

OMAHA (AP) — There are two camps when it comes to the Rev. Dave Korth’s ever-growing mane of silver hair, he said.

The side that loves it and brings the pastor of Sacred Heart Church headbands, scrunchies and hair ties and jokingly tells him they want to invest in his hair product company.

And the other group, which includes the more motherly figures who can’t believe the flip he’s developed and want him to cut it right away.

As in having his mother, Margaret, knock him out and give it a chop.

“I can’t wait to get it cut,” Korth said of his pandemic locks. “I had to turn 54 to find out I actually had some curl in my hair.”

The Omaha World-Herald reported that Korth last had his hair trimmed in March and was overjoyed when barbershops and hair salons started reopening in May after being closed because of the coronavirus. He typically wears his hair very short on the sides and a little longer on the top.

But then he decided, and he’s still not exactly sure why, that he would let his hair go as an indicator of just how long the pandemic has been raging. At the eighth-month mark, his hair is shoulder-length.

Korth — who grew up in Randolph — said he won’t get it cut until a vaccine is developed.

There’s only one other thing that would change his mind.

“I tell you what. If someone comes forward and gives CUES a million dollars if I get my hair cut, I’m taking it.”

He has to raise $5 million a year to keep the schools running, so a $1 million donation definitely would come in handy.

It also would end his daily battle with his hair. Without a heavy dose of leave-in conditioner, Korth said, he looks just like Jeff Daniels in the movie “Dumb and Dumber.”

“It’s over my eyes, all over the place,” he said. “I can’t go out in public looking like this.”

Korth said he can’t believe he’s actually talking about hair product. It’s never been something he’s had to address, especially in the 28 years he’s been a priest.

He was too young in the 1970s growing up in Randolph to rebel and have long hair. Until he moved to Omaha, he had his own favorite barber in his uncle and godfather, Martin Gubbels.

“I probably would not have done this if I still had my own personal barber to go to,” he said. “No. 1, he wouldn’t let me.”

The notoriety he’s gained from his lengthening hair is actually Korth’s second brush with fame this year. Korth said he might have been caught dancing in his parish’s rousing version of “Oh, Happy Day,” an Easter tradition that was taken to a new level this spring with soloist Toni Holiday, aka Tamborine Toni. You can find it on YouTube.

Korth often mentions his hair in his sermons — he’s praying for someone to find a vaccine. He recently discovered that the patron saint of barbers is St. Martin de Porres, so now he has someone to pray to. He even thinks it’s attracted more people to the parish’s online Masses.

All kidding aside, Korth hopes that all the hoopla brings people some joy and a few laughs. He also wants his long hair to remind people about the sacrifices made by health care workers and teachers during the pandemic.

“It’s important that we show our appreciation and watch after the mental health of our teachers and school staff,” he said. “This is an awful lot of pressure we are putting them under.”

Korth grew up the youngest of seven on a farm near Randolph and played basketball and football in high school. He attended Mount Marty College in Yankton, South Dakota, for a year, then transferred to Conception Seminary College in Conception, Missouri. He completed his theological training at St. Paul Seminary School of Divinity in St. Paul, Minnesota.

He was ordained in 1992. Previous assignments included St. Leo Church in Omaha and St. Patrick Church in Fremont. He was campus minister at Scotus Central Catholic in Columbus before taking a position with the St. Augustine Indian Mission in Winnebago.

For people who don’t see Korth often, it’s a shock to see how much his hair has grown. It isn’t quite long enough to tie back, although that’s coming soon.

He’s also made one other tiny request before it’s cut and the hair is donated to Locks of Love.

A good friend from his days as the director of St. Augustine’s Indian Mission in Winnebago used to cornrow her son’s hair before all of his basketball games.

Although no one will ever see it — he hopes — he’s asked if she’d do the same just once to his hair.

“I have that to look forward to,” he said.

LONDON (AP) — Britain authorized a COVID-19 vaccine for use Wednesday, greenlighting the first shot backed up by rigorous scientific review. The first vaccinations are expected within days — a major step toward eventually ending the pandemic.

NEW YORK (AP) — Health care workers and nursing home residents should be at the front of the line when the first coronavirus vaccine shots become available, an influential government advisory panel said Tuesday.

BERLIN (AP) — Residents of Trier placed flowers and lit candles at the base of the southwestern German city’s landmark Roman gate Wednesday in tribute to the five people who were killed and more than a dozen others injured when a man sped an SUV through a central pedestrian zone. His motive …

NEW YORK (AP) — An owner of a New York City bar that was providing indoor service in defiance of coronavirus restrictions was arrested after a sting in which plainclothes officers went inside and ordered food and beverages, the city sheriff’s office said.

Visitor: Monolith toppled by group who said ‘leave no trace’

SALT LAKE CITY (AP) — New clues have surfaced in the disappearance of a gleaming monolith in Utah that seemed to melt away as mysteriously as it appeared in the red-rock desert — though it’s no longer the only place where a strange structure has come and gone.

Members of the Norfolk Men’s Chorus wish they were spreading the joy of Christmas in song this year, as they’ve done every year since 1989.

Each year the demand for the Northeast Nebraska Child Advocacy Center (NENCAC) increases — including the role the United Way plays.

The Norfolk Public Schools board of education announced a special meeting has been scheduled on Friday, Dec. 4, at noon.

Madison County to be part of recount for an NRD race

MADISON — Right now, just one vote separates John R. Hannah and David W. Lawrence, with Lawrence in the lead for a seat on the Lower Platte North NRD.

LONDON (AP) — Britain authorized a COVID-19 vaccine for use Wednesday, greenlighting the fir…

Visitor: Monolith toppled by group who said ‘leave no trace’