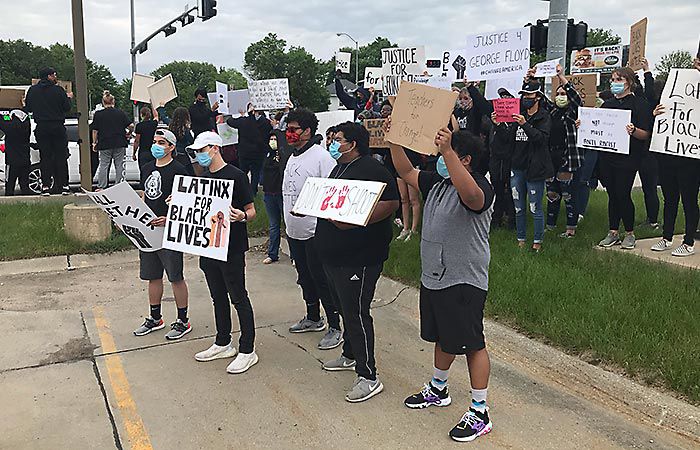 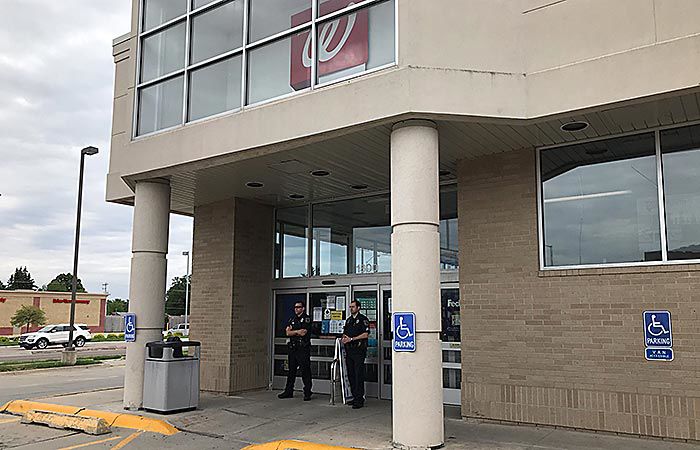 A peaceful protest in Norfolk over George Floyd’s death in Minnesota attracted an estimated 200 to 250 people on both sides of South 13th Street on Saturday evening.

The protest began around 6 p.m. at the corner of 13th Street and Norfolk Avenue with about 20 protesters holding signs amid honks from passing vehicles. Some were heard chanting, “I can’t breathe,” and at least four uniformed officers were seen nearby. More officers were located elsewhere.

The numbers soon grew to around 100 on the perimeter of the Walgreen's parking lot, and two organizers said they were trying to keep it peaceful and wouldn’t agitate unless provoked. Most of those attending were wearing masks, and many were holding signs remembering Floyd.

As the numbers grew, the protesters started moving south on 13th Street.

Many businesses in the immediate area closed, and the weekly Saturday night cruise night also led to more traffic than usual.

The Norfolk protest comes on the heels of violent protests across the country.

Elsewhere in Nebraska, on Friday night and into Saturday morning, protests in Omaha and Lincoln resulted in two dozen arrests, injuries to police officers and damage to businesses and police cars.

Nebraska Gov. Pete Ricketts condemned the vandalism and violence after the protests turned to unrest. But the governor also said “the significant majority” of protesters were peaceful.

Floyd’s death in Minneapolis has sparked protests in cities throughout the country. Floyd, who was black and was handcuffed, died after a white police officer, Derek Chauvin, used his knee to pin down Floyd’s neck for several minutes while Floyd pleaded for air and eventually stopped moving. Chauvin now faces third-degree murder and manslaughter charges.

In Omaha, 21 people were arrested on charges including disorderly conduct, failure to disperse, firearms possession and destruction of property.

Thousands of people blocked two streets near a mall in a busy commercial area a few miles west of downtown in a demonstration that began Friday evening with protesters carrying signs and chanting.

But as the night wore on, some protesters vandalized nearby businesses, mostly by breaking windows. Omaha police said people were still in the area around 1 a.m.

In Lincoln, three people were arrested for failing to disperse. A protest there started at 2 a.m. Saturday with about 200 people and continued for hours.

Eight Lincoln police officers were injured, and one officer was taken to the hospital to get staples to his head after having a projectile thrown at him.

Lincoln Police Chief Jeff Bliemeister said three police cruisers were damaged, and there were nine reports of vandalism. The most extensive damage was to a business about a mile northeast of the Nebraska Capitol.

Editor's note: The Associated Press contributed to this story.

BANGKOK (AP) — Thailand’s Education Ministry has intervened to stop government schools from chopping off the hair of students whose locks they find too long or messy.

LONDON (AP) — Johnny Depp said in a London court on Friday that ex-wife Amber Heard’s claims he abused her turned him from “Cinderella to Quasimodo” in the public eye.

The Norfolk Fire Division responded to a fire call at the Skyline apartments early Friday morning.

Construction scheduled to begin next week on new type of intersection

Board of education to vote on graduation ceremony

The Norfolk Public Schools’ board of education is scheduled to vote on a proposal to hold its graduation ceremony at 2 p.m. Sunday, July 26, at Skyview Lake during its regular meeting on Monday.

Was it wise for the U.S. to withdraw from the World Health Organization?