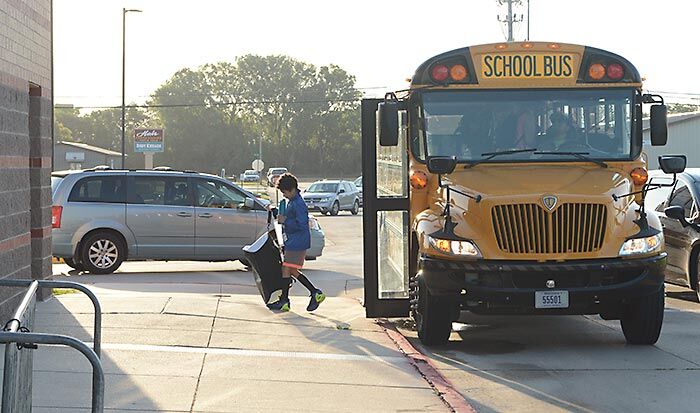 A NORFOLK MIDDLE SCHOOL student steps off a bus on the first day of school on Aug. 11. 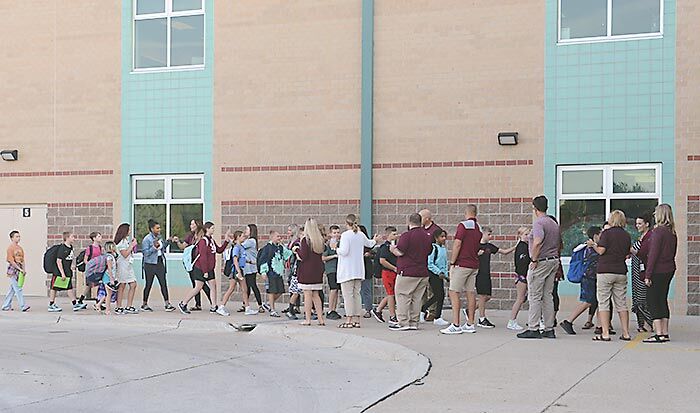 STUDENTS HIGH-FIVE Norfolk Middle School staff as they enter the building on their first day of school. 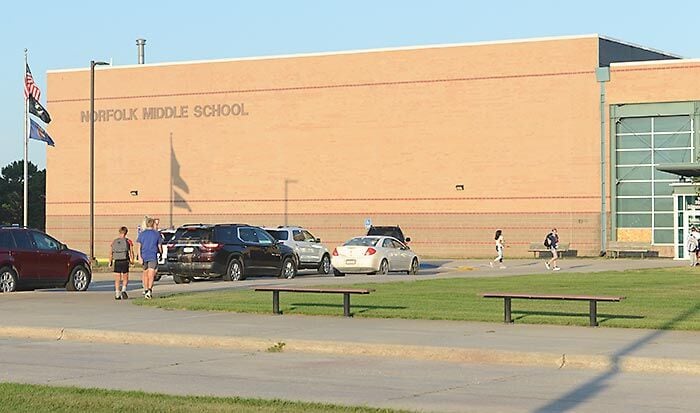 STUDENTS WALK toward the Norfolk Middle School entrance on Aug. 11 for their first day of school. Due to the delayed Benjamin Avenue construction, students were dropped off on the east and west sides of the school to keep the traffic flowing.

A NORFOLK MIDDLE SCHOOL student steps off a bus on the first day of school on Aug. 11.

STUDENTS HIGH-FIVE Norfolk Middle School staff as they enter the building on their first day of school.

STUDENTS WALK toward the Norfolk Middle School entrance on Aug. 11 for their first day of school. Due to the delayed Benjamin Avenue construction, students were dropped off on the east and west sides of the school to keep the traffic flowing.

Occasionally, a driver would stop by a staff member, roll down the window and ask for directions. It's not normally a part of Norfolk Middle School’s first day of school responsibilities, but the change is due to the nearby construction.

The City of Norfolk and BX Construction announced at an open house last month that its Benjamin Avenue project was three weeks behind schedule. The construction delay directly affects Norfolk Middle School, which is located at the corner of First Street and Benjamin Avenue.

Jami Jo Thompson, superintendent of NPS, said at the board of education meeting Monday that the district is prepared for traffic delays.

“Maps and traffic plans have been sent to parents, but I'm sure that we will experience delays,” Thompson said.

NPS began working with BX Construction, the City of Norfolk and the Norfolk Police Division in July to make traffic plans for potential delays near Norfolk Middle School and Norfolk Junior High. The plans, which also include maps with directions, were shared with parents before the first day of school.

Students could be dropped off at either the east or west side of the Norfolk Middle School building. Parents are asked to use Georgia Avenue to exit the school parking lot.

Chuck Hughes, the Norfolk Middle School principal, and Jen Robinson, the Norfolk Junior High principal, both asked parents and drivers to remain patient and courteous with each other during potential traffic delays.

“We ask that you give yourself some extra time and encourage families to carpool if possible. We know it is an inconvenience right now but look forward to its completion in the near future,” Hughes said.

According to Robinson, Norfolk Junior High and Norfolk Middle School both worked with School Resource Officer (SRO) Brent Tietz to help create the traffic plan maps for the public. Other street officers assisted with the junior high traffic on Thursday morning.

The street officers conduct traffic selectives, in which they monitor school traffic, for all NPS schools. However, they will pay extra attention to both projects at Norfolk Junior High and Norfolk Middle School, she said.

“The first few weeks of any given school year present challenges and periods of readjustment,” Robinson said. “We will start the school year by spending time evaluating circumstances and readjust as necessary.”

Project manager Colin Karst said last month that all four lanes of Benjamin Avenue — near Norfolk Middle School — are expected to be open by the end of September.

“The city is working very, very hard putting in extra hours to get the necessary work completed as soon as possible,” Thompson said.

According to Robinson, construction projects for both Norfolk Junior High and Christ Lutheran School are expected to be finished by fall 2023.

OAKLAND, Calif. (AP) — At least six adults were wounded in a shooting at a school campus in Oakland on Wednesday, with at least some of the victims found inside the school, authorities said.

A Beemer woman died Monday after a one-vehicle crash in Cuming County.

Norfolk Public Schools will host an open house for Grant Elementary and Lincoln Montessori Elementary on Thursday, Sept. 29, from 4 p.m. to 6 p.m.

A rural Howells man was arrested on a felony weapon charge on Tuesday.

GRAND ISLAND — A popular attraction at summer fairs across the country feature newborn or hatched animals that allow patrons to see them up close. For a group of students at Northeast Community College, they had an experience working with animals in a such a setting they’ll never forget.

US seeks united front in Asia despite Korea, Japan tensions

YOKOSUKA, Japan (AP) — Standing on the deck of an American destroyer at a naval base here on Wednesday, Vice President Kamala Harris directly challenged China by accusing it of “disturbing behavior” and “provocations” around Taiwan.

4'Hers receive achievement awards at ceremony

The Madison County Nebraska Extension’s 4-H achievement ceremony offered a chance to recognize the efforts of 4-H’ers around the county.

Cuba begins to turn on lights after Ian blacks out island

HAVANA (AP) — Cuban officials said they had begun to restore some power Wednesday after Hurricane Ian knocked out electricity to the entire island while devastating some of the country’s most important tobacco farms when it hit the island’s western tip as a major storm.

At a Florida trailer park, survivors speak of Ian's wrath

US hits Russia with sanctions for annexing Ukrainian regions

KABUL, Afghanistan (AP) — A suicide bomber struck an education center in a Shiite area of th…

"If we captured that bird, we could get a few more feathers for your hat."

Christopher Swenson
was this week's winner.