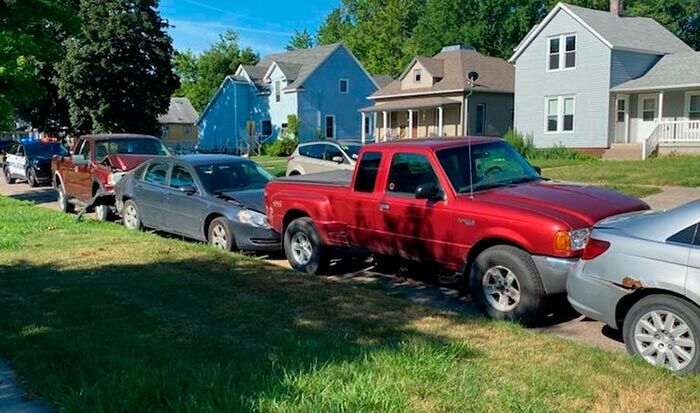 ONE DRIVER was transported to the hospital following a Tuesday morning accident. A northbound maroon Ford F-150 struck a parked vehicle in the 800 block of Fourth Street. 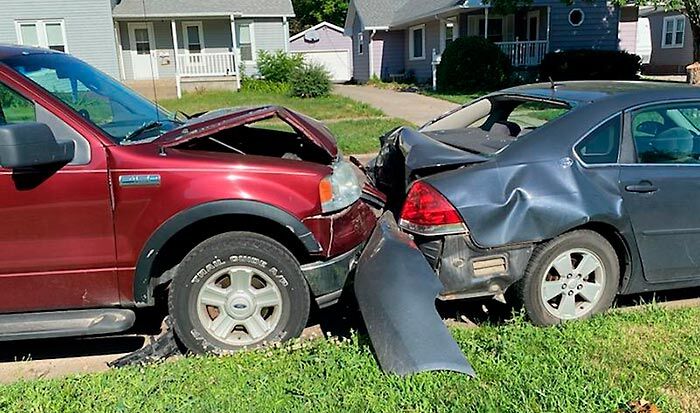 A FORD F-150 and Chevy Impala were totaled in a Tuesday morning accident, according to police.

ONE DRIVER was transported to the hospital following a Tuesday morning accident. A northbound maroon Ford F-150 struck a parked vehicle in the 800 block of Fourth Street.

A FORD F-150 and Chevy Impala were totaled in a Tuesday morning accident, according to police.

A woman was transported to the hospital and multiple vehicles are believed to be totaled following a collision involving four vehicles Tuesday morning in Norfolk.

At about 8:45 a.m., Norfolk police were called to a scene in the 800 block of Fourth Street in Norfolk where a northbound pickup had struck a parked vehicle, which then resulted in two additional parked vehicles sustaining damage.

When officers arrived, they found an elderly woman behind the wheel of a maroon Ford F-150 holding her head.

The woman driving the F-150 is believed to have had a medical episode before colliding with a gray Chevrolet Impala, totaling the Impala, police said.

The Impala then collided with a parked red Ford Ranger pickup, which subsequently collided with a silver Chrysler Sebring. The Impala is owned by Janice Hledik of Norfolk. The owner of the Ranger and the Sebring, a Norfolk woman, wished not to be identified.

The female driver of the F-150 was transported to the hospital with possible head and leg injuries that were not believed to be life-threatening.

Shortly after midnight Saturday, a Norfolk police officer stopped a vehicle for speeding on East Norfolk Avenue, which subsequently resulted in a drug arrest.

SOUTH SIOUX CITY (AP) — Good ideas remain good ideas, no matter how long it takes for them to come to fruition.

Areas in the Maple Creek watershed have been prone to flood events for decades, affecting families for generations. Citizens and community members from the watershed have asked the Lower Elkhorn Natural Resources District to assist with flood reduction projects and conservation programs to h…

WAYNE — Ten Wayne State College graphic design students will have the opportunity to showcase their talent during the annual Senior Portfolio Review on Thursday, Dec. 9, from 3:30 to 4:45 p.m. in the Niobrara Room of the Kanter Student Center on the WSC campus. This event is free and open to…

MIAMI — Three Miami-Dade firefighters were struck by a cast-iron bathtub that fell when the second floor of a burning home collapsed Monday, fire rescue said

Cyber Monday sales should be robust but business cooling

THE HAGUE, Netherlands (AP) — Cases of the omicron variant of the coronavirus popped up in c…