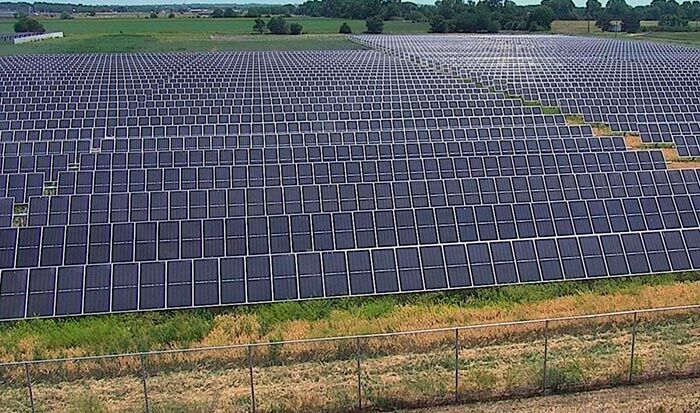 A new solar farm in Norfolk will generate enough electricity to provide 10% of the town’s peak needs, while at the same time saving customers money. 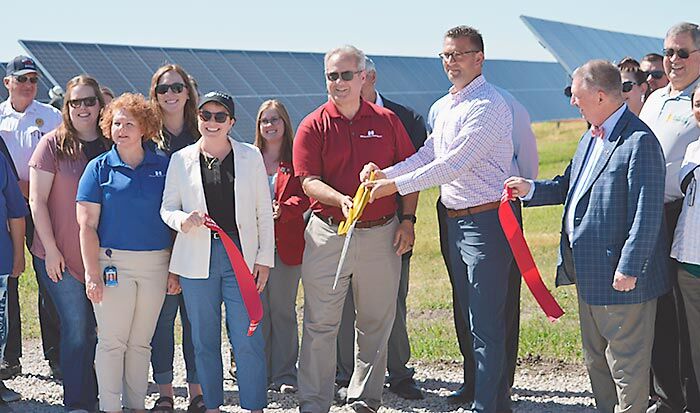 A new solar farm in Norfolk will generate enough electricity to provide 10% of the town’s peak needs, while at the same time saving customers money.

Solar power is coming to Norfolk in a big way.

And yet, Wednesday’s ribbon-cutting ceremony for the Norfolk Community Solar facility represented a few significant milestones in the renewable energy industry not just for Norfolk, but all of Nebraska.

As the largest solar facility in the state, the newly minted power plant just off of South 49th Street and West Norfolk Avenue is another step toward expanding Norfolk’s role as a hub for renewable power, according to Norfolk Mayor Josh Moenning, who spoke at the Wednesday morning ceremony.

“I think it works to solidify Norfolk’s momentum as the clean energy capital of Nebraska,” Moenning said.

The sprawling facility comprises 26,000 panels spread out across 70 acres of state-owned land, capable of generating 8.5 megawatts of power, equal to roughly 10% of the city’s current power load, as well as a battery system capable of storing an additional 1 megawatt.

The resultant power output won’t just be limited to city-owned systems, however. According to Tom Kent, president of the Nebraska Public Power District (NPPD), through an ongoing “solar shares” program involving payment of a one-time $50 solar enrollment fee, thousands of Norfolk families will be able save roughly $16 on their monthly utility bills while also taking an active role in promoting sustainable energy production.

“It gives (Norfolk residents) a chance to participate in renewable energy, and a chance to have some predictability on their energy costs,” Kent said. “If you’re interested in solar, it may not work because of (trees) or where your house is located. This is a way where we can collectively provide that benefit.”

Still, the program has been met with some skepticism. Of the 9,557 shares available through the plant, only 3,700 were dolled out to customers, with the rest going to the city.

That’s less than what the city initially offered to the public, according to NPPD account manager Brittney J. Koenig, who also presented the morning’s various speakers from the organizations involved in the project. She said the complexity behind trying to explain how the program can help save money in the long-run can make it a tough sell.

“I think a lot of (the lack of community buy-in) was maybe a little uncertainty,” Koenig said. “I think people really have to have it broken down for them to understand, and it’s hard to write that in an article … there’s a lot of ‘mental calisthenics.’ ”

She said the best way to convince people of the efficiency and cost-saving potential of adding renewable power to their grid is to talk to them face-to-face and break it down piece-by-piece.

For Norfolk residential customers, each monthly solar share costs $6.15, while the corresponding rebate is $8.70. Customers also save through lower taxes and fees on their bills. Homeowners can purchase up to five shares. (Residents pay a one-time signup fee of $50 and get that money refunded after three years.)

All shares have sold out, and there is now a waiting list. Rebates began showing up on this month’s bills.

Randy Gates, finance director for Norfolk, said the city would save about $170,000 a year on its electric bills. The city’s residents and businesses will see a total savings of $132,000 a year, he said.

Speaking to the economic feasibility of renewable energy, Moenning said there doesn’t have to be a balancing act between sustainable practices and maximizing profit.

He pointed to the payoff from increased tax revenue for counties and subsidies for farmers who allow construction of wind farms on their lands as direct material benefits from renewable energy, with the expansion of environmentally friendly practices as an added bonus.

And while the renewable energy industry has a long-standing reputation of being buoyed by government subsidies, Moenning alluded to the construction and maintenance of Norfolk’s solar plant being privately funded as proof that such projects can be self-sustaining through cooperation with local municipalities on front-end logistics like land allocation.

“It’s a huge opportunity … to me it’s all good things, and we’re being part of the climate solution,” Moenning said. “I don’t think you’d see Fortune 500 companies investing the billions of dollars that they are into establishing these projects if they weren’t somehow profitable in the end.”

Pulling off a project like Norfolk’s is far from straightforward, however.

The two-year venture was possible in part due to N Solar, a triumvirate of companies that each handled different aspects of the project. It included GenPro Energy Solutions, which handled acquisition of materials and construction of the plant; Sol Systems covering the financing for the project; and Mesner Development, which dealt with the zoning and land development logistics.

Through an agreement with the Norfolk city government, N Solar was granted the land to develop the plant in exchange for fronting the costs for the facility.

Despite the complexity involved, the construction of the facility went relatively smoothly thanks to seamless cooperation between N Solar and Norfolk, according to Molly Brown, GenPro executive vice president.

Nonetheless, she said the project also benefited from a little bit of luck, narrowly dodging the ongoing supply chain crisis, aside from experiencing a delay on the battery.

“That was kind of the big kicker,” Brown said. “But we managed to order everything (else) right before that hit.”

Just as important to the project’s success was support from NPPD, which is responsible for the distribution of the power, although Kent said it was the combined efforts of everyone involved that made the end result possible.

“We go back as business partners with the city of Norfolk for a very long time, and so to work with the city and the development team to bring this to the community has been very rewarding and fulfilling,” Kent said. “It’s all these different entities coming together in partnership to make it work and, ultimately, we’re providing a product that the people in Norfolk can take advantage of.”

Library to be closed; NNEDD annual meeting scheduled; Library meeting to be held.

NATO calls Russia its 'most significant and direct threat'

MADRID (AP) — NATO declared Russia the “most significant and direct threat” to its members’ peace and security on Wednesday and vowed to strengthen support for Ukraine, even as that country's leader chided the alliance for not doing more to help it defeat Moscow.

BERLIN (AP) — A 101-year-old man was convicted in Germany of more than 3,500 counts of accessory to murder on Tuesday for serving at the Nazis’ Sachsenhausen concentration camp during World War II.

The July Fourth holiday weekend is off to a booming start with airport crowds crushing the numbers seen in 2019, before the pandemic.

Nurse aide class to be offered at Northeast in O’Neill

O’NEILL — A three-credit course at Northeast Community College in O’Neill will teach basic skills needed to provide safe, effective and caring services to the elderly or chronically ill patients of any age in a long-term care facility.

KREMENCHUK, Ukraine (AP) — French President Emmanuel Macron said Tuesday that Russia “cannot and should not win” the war in Ukraine, a day after a Russian missile attack on a crowded shopping mall that killed 18 put the conflict's terrible toll on full view.

US to boost military presence in Europe for Russia threat

MADRID (AP) — President Joe Biden said Wednesday that the U.S. will significantly increase its military presence in Europe for the long haul, including by establishing its first permanent presence in Poland, to bolster regional security after Russia’s invasion of Ukraine.

BEEMER — Three country cemeteries in the Beemer area now have new flagpoles in place thanks to the work of Beemer’s Sons of American Legion.

WASHINGTON (AP) — More than 500 days into his presidency, Joe Biden's hope for saving the Ea…

It has not been an easy week for Russian President Vladimir Putin.

Janice Sherman
was this week's winner.