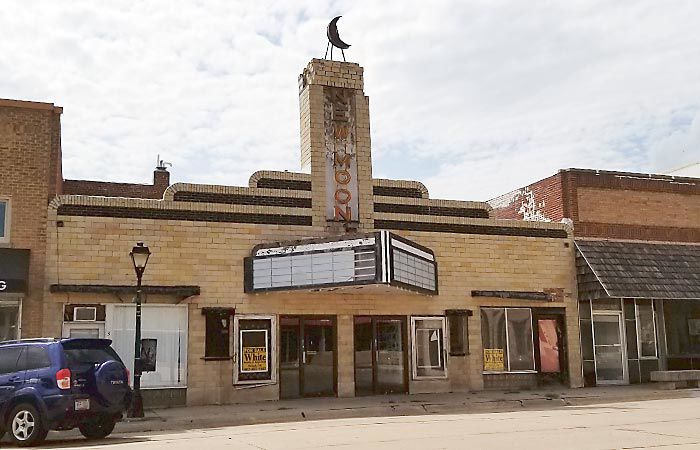 THE NEW MOON THEATER is currently for sale after being closed the latest time in 2014. A group of Neligh residents want to see building open again. 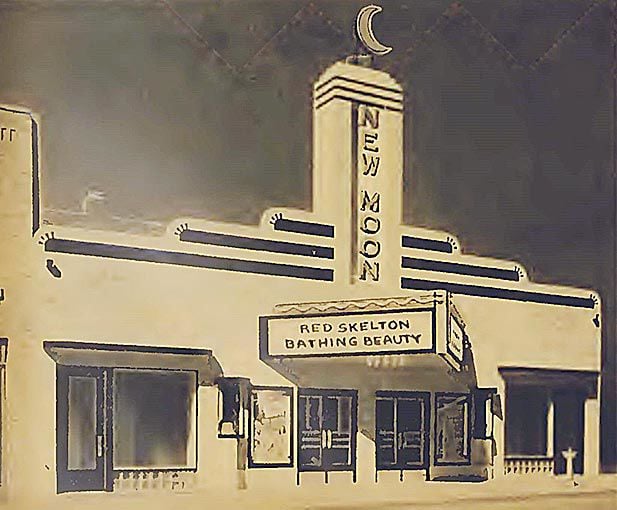 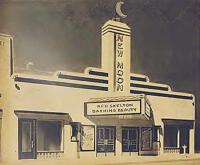 ORIGINALLY KNOWN as the just the Moon Theater, it was damaged in a fire in 1944. It was rebuilt by architect Henry A. Raapke of Omaha and owner Walt Bradley and rechristened as the New Moon. Here, the photo shows the building after it was rebuilt.

THE NEW MOON THEATER is currently for sale after being closed the latest time in 2014. A group of Neligh residents want to see building open again.

ORIGINALLY KNOWN as the just the Moon Theater, it was damaged in a fire in 1944. It was rebuilt by architect Henry A. Raapke of Omaha and owner Walt Bradley and rechristened as the New Moon. Here, the photo shows the building after it was rebuilt.

NELIGH — The New Moon Theater in the heart of this Antelope County community remains dark.

Though one might expect that to be the norm at a movie theater, the silver screens haven’t seen the light of a projector in years.

The theater’s distinct art deco facade, highlighted by a tall spire topped with a metal crescent moon, towers over downtown Neligh. But the building has seen better days.

The outside is worn down and the windows are covered by “for sale” signs, the roof needs significant repair and mold has developed inside.

But its story isn’t over yet. A group of Neligh residents want to give the theater a future.

Melanie Miller, a Neligh native, said she is one of many in the community who want to restore the theater to its former glory.

“There’s a lot of nostalgia. I saw my first movie there; I first saw ‘Star Wars’ there with my parents,” Miller said. “It means a lot on a personal level for people in Neligh, and many of those people’s kids would have a chance to experience it, too.”

The building was once a proud landmark of the community of about 1,500 residents.

Originally known as the just the Moon Theater, it was damaged in a fire in 1944. It was rebuilt by architect Henry A. Raapke of Omaha and owner Walt Bradley and rechristened as the New Moon. At the time, it was seen as a quintessential modern theater and a representation of small-town America.

“Indicative of what has been accomplished recently in modern theater building under the most drastic conditions is the New Moon Theatre in Neligh, Nebraska,” Helen Kent wrote in a December 1944 issue of Boxoffice Magazine.

“Despite hardships of planning and construction,” Kent wrote, “the New Moon Theatre is outstanding in many respects. It is the type of small theatre which testifies again and again to the progressiveness of our small-town showmen.”

The theater changed hands several times over the decades, eventually sold by the Bradley family. The New Moon and the nearby Starlite Drive-in theater worked to compete both against each other and other entertainment options.

The theater received love from Nebraska filmmaker Alexander Payne in 2012, when he directed his film “Nebraska.”

Payne and some of his crew screened a black-and-white movie on film, rather than digital as many modern theaters do today.

“This fabulous theater is one of the last theaters in Northeast Nebraska to use film. It’s a beautiful theater. I can’t say enough about it,” Payne said to the Neligh News and Leader in 2012.

The theater was bought in 2011 by Stacy Klabenes, a Neligh farmer, who didn’t want to see the two theaters shuttered for good.

“It came up for sale, and I didn’t want it to get closed,” Klabenes said then. “I like watching movies, and I thought it would be a good investment.”

However, the theater was closed down in 2014 and Klabenes put the building up for sale earlier this year, along with the TK Starlite Drive-in theater, which he also owns. The building is being sold through White Realty and Appraisal, based in Neligh, and is available for $50,000.

“We’re an ag community; there’s an arts community that is under-represented,” she said. “We can make this into a community space to support the arts.”

Miller said Neligh residents are taking a similar approach that has been done in West Point and Ord.

Those towns, among others in Nebraska, both have revitalized theaters, owned by local nonprofit organizations that cater to the arts in the community.

“More towns are taking that approach, because that’s how (those theaters) will survive in small communities,” Miller said.

The idea of a nonprofit takeover is also an economically sensible option, according to Gabriel Steinmeyer, Neligh’s economic development director.

Steinmeyer said that under private ownership, the owners could apply for downtown revitalization grant funds to use to renovate the theater, which the city couldn’t do if it directly owned the building.

Given the state of the building and challenging economic times, restoring and making the theater viable is a tall order, but Miller said people are motivated to make it work.

“This would be a labor of love, an enormous task,” Miller said. “But there’s wide support for a revitalized community space to make Neligh welcoming and attractive.”

Protests, some violent, spread in wake of George Floyd death

ATLANTA (AP) — Demonstrators marched, stopped traffic and in some cases lashed out violently at police as protests erupted Friday in dozens of U.S. cities following the killing of George Floyd after a white officer pressed a knee into his neck while taking him into custody in Minnesota.

Minorities appear to be hardest-hit by virus in Nebraska

Pierce County has another positive test

O’NEILL — The North Central District Health Department was made aware of an additional positive case in Pierce County on Friday. The case had contracted the illness through direct contact with a confirmed case.

Threats end up getting man prison

A Florida man was sentenced to prison for making threats against the Santee Sioux Nation.

Project to look at solutions to Willow Creek toxic algae

CAPE CANAVERAL, Fla. (AP) — NASA is rolling out the International Space Station’s red carpet for Tom Cruise to make a movie in orbit.

NEW YORK (AP) — When hundreds of artists started singing from their living rooms when the coronavirus pandemic hit, Grammy-winning DJ-producer David Guetta still wanted to perform in front of a live audience.

PARIS (AP) — Europe’s extensive social welfare net was showing signs of fraying under economic strain from the coronavirus, as protests erupted Friday for a second day in Spain against layoffs by French carmaker Renault, while Italy’s chief central banker warned that “uncertainty is rife.”

Do you trust Twitter to be a fact checker?

Protests, some violent, spread in wake of George Floyd death

ATLANTA (AP) — Demonstrators marched, stopped traffic and in some cases lashed out violently…

Minorities appear to be hardest-hit by virus in Nebraska

OMAHA, Neb. (AP) — The coronavirus pandemic appears to be taking a “startling,” disproportio…