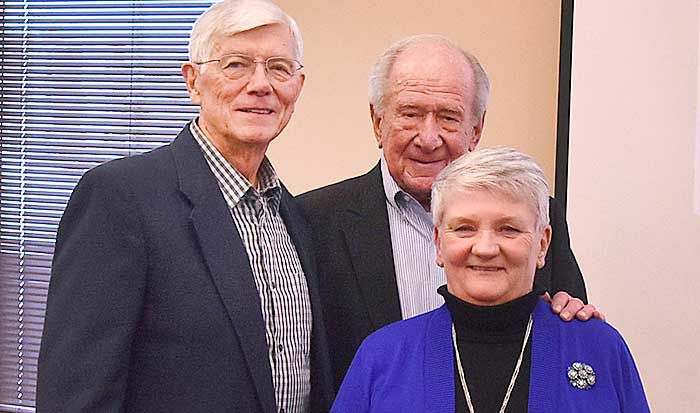 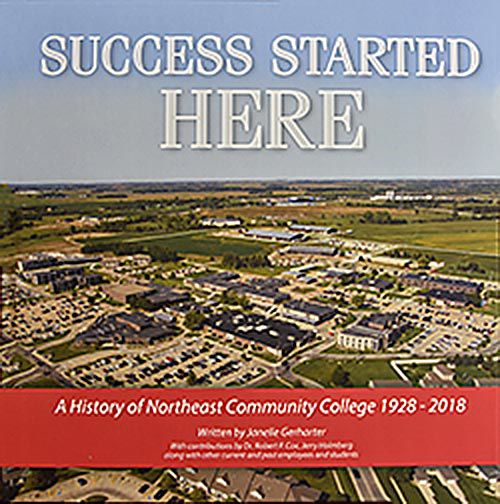 Northeast Community College has a rich history with origins dating to the early 20th century.

Now, the story of the college and its predecessor institutions has been detailed in a new book, according to a Northeast media release.

In “Success Started Here, A History of Northeast Community College 1928-2018,” author Janelle Gerharter documents the storied past of the institution that began with the founding of Norfolk Junior College in 1928.

“This history was developed after examining several boxes of historical materials at the college, old college recruitment materials, every college yearbook and student newspaper, all official minutes of the Norfolk Board of Education and Northeast Community College and its predecessor institutions,” she said. “Some 14,000 digitized Norfolk Daily News articles from 1926-1994 were examined at the Norfolk Public Library. College materials at the Elkhorn Valley Museum were also examined.”

Gerharter, who served in the college’s public relations department beginning in 2000 and retired as director of public relations in 2012, said the idea to develop a comprehensive history of the college and its predecessor institutions originated with former President Dr. Michael Chipps.

“He called a small group of former employees together with his thoughts shortly after the college celebrated its 40th anniversary in 2013. It was my distinct pleasure to work extensively with former President Dr. Robert P. Cox and Jerry Holmberg, who held several positions at Northeast from 1978 to 2006.”

Gerharter said both men are passionate about the history of the college.

“Dr. Cox brought countless memories from his years as president from 1972-1995. If I’d mention a name about a board member or staff person, he often had a memory about that individual. Jerry Holmberg worked tirelessly for many years developing the history of athletics at Northeast. This history contains information about all athletic teams, season records and coaches ever fielded at the college.”

In addition, the athletic section contains every mascot, logo, names of every athletic director, and Hall of Famers from the college. A minute number of season records could not be found, but Gerharter said Holmberg did “an incredible job of preserving athletic history.”

The 240-page hard-cover edition contains many photographs from over the years and includes multiple chapters that highlight awards and recognitions, memories from former students and employees and feature information on some notable students such as Thurl Ravenscroft, best known for his work as the voice of Tony the Tiger and with the Walt Disney Co., and Johnny Carson, former host of NBC’s “The Tonight Show.”

In researching the history, Gerharter said she found three brief periods that stand out. One of which was in the mid- to late 1920s when a core group of business people worked tirelessly to open the college in “borrowed” quarters on the third floor of the Norfolk Senior High School on Pasewalk Avenue in fall of 1928. This stressed the importance of keeping high school graduates under “home influence” two more years.

“Another period of the history that really impressed me was the World War II years, before and after,” Gerharter said. “The college was part of the Norfolk Public School system at that time and, on Oct. 28, 1941, Norfolkans voted by a 6-1 margin to reopen the Norfolk Junior College after being forced to close it in May of 1932.”

After the war, male enrollment skyrocketed. The student body was composed of 17-year-olds who had never left home and male students who had traveled the world to fight the war.

Gerharter said another time in the college’s history that stands out was in the 1960s after voters in a 14-county area approved establishment of a local area vocational/technical school and levy to support it in a June 1967 election.

“Competition for the college location was fierce. Some 17 communities in Northeast Nebraska wanted to host the college,” she said. “Letters to the editor were printed in area newspapers either advocating for one location or fearing that the smaller communities were not being seriously considered. In the end, Norfolk was chosen as the site of the college.”

Gerharter said the college was made “great” by forward-thinking men who date back to the mid-1920s. She said after being closed for 10 years in the 1930s, it reopened with a roar and administrators never looked back.

“This history relays many of the triumphs and, yes, a few setbacks, that led to the college being what it is today. I hope everyone enjoys a look back at Northeast Community College.”

The book may be purchased through the Northeast Community College Hawks Shop on the Norfolk campus or at https://collegestore.northeast.edu/

Jamie Bear, the Norfolk native who was missing from the Lincoln Community Corrections Center, was arrested Monday in Norfolk.

PARK CITY, Utah (AP) — Midway through the film festival he founded more than four decades ago, Robert Redford hopped out of a car and hollered to his grandson. The 28-year-old Dylan Redford was later that evening to premiere at Sundance a film he co-directed.

US, others prepare evacuations as virus spreads from China

BEIJING (AP) — The United States and several other nations prepared Tuesday to airlift citizens out of a Chinese city at the center of a virus outbreak that has killed more than 100 people.

CAPE CANAVERAL, Fla. (AP) — After nearly 11 months in orbit, the astronaut holding the record for the longest spaceflight by a woman can’t wait to dig into some salsa and chips, and swim and surf in the Gulf of Mexico.

In “Prairie University: A History of the University of Nebraska,” Husker teaching luminary Robert E. Knoll provides what is considered the definitive history of the institution, spotlighting its birth as a land-grant university in the late 1860s.

LINCOLN — Edwin Frahm’s sudden good fortune was announced to the world on June 7, 1990.

US, others prepare evacuations as virus spreads from China