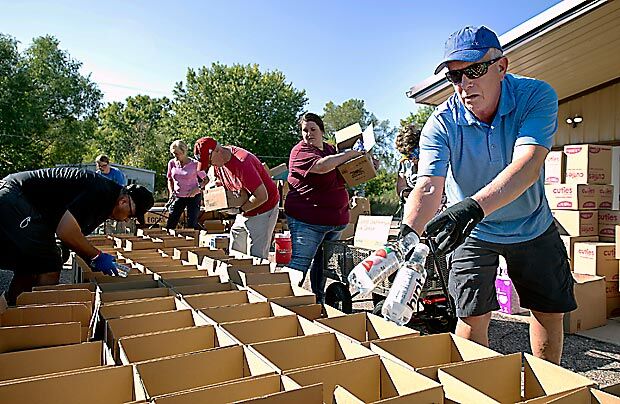 Volunteer Jim Coye of Omaha tosses bottles of water into boxes during a mobile food bank Tuesday, Oct. 5, 2021, at Our Lady of Fatima Catholic Church in Macy, Neb.. Catholic Charities of Omaha began holding mobile food banks on the first Tuesday of each month in both Macy and Walthill, Nebraska. 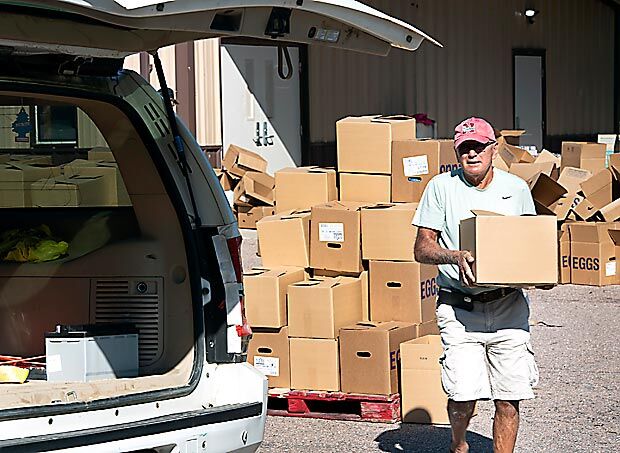 Ron Eike of Omaha carries a box of food to a van during a mobile food bank Tuesday, Oct. 5, 2021, at Our Lady of Fatima Catholic Church in Macy, Neb. Catholic Charities of Omaha began holding mobile food banks on the first Tuesday of each month in both Macy and Walthill, Nebraska.

Volunteer Jim Coye of Omaha tosses bottles of water into boxes during a mobile food bank Tuesday, Oct. 5, 2021, at Our Lady of Fatima Catholic Church in Macy, Neb.. Catholic Charities of Omaha began holding mobile food banks on the first Tuesday of each month in both Macy and Walthill, Nebraska.

Ron Eike of Omaha carries a box of food to a van during a mobile food bank Tuesday, Oct. 5, 2021, at Our Lady of Fatima Catholic Church in Macy, Neb. Catholic Charities of Omaha began holding mobile food banks on the first Tuesday of each month in both Macy and Walthill, Nebraska.

MACY (AP) — It’s about 15 minutes before 11 a.m., and cars, pickups and vans begin lining up down the street and around the corner from Our Lady of Fatima Catholic Church in Macy.

Those inside the vehicles wait patiently while a dozen volunteers from Omaha fill boxes and sacks with canned food, meat and bread and unload boxes of fresh produce and diapers from a truck and van.

Once the clock hits 11, Mikaela Schuele waves the first pickup forward, collects the driver’s name and family information and instructs her to pull forward to pick up her free food and diapers and wipes, if she has young children in her home.

The Sioux City Journal reports that in a community noted for its high poverty rate, the gift of food is appreciated by everyone who drives through.

“Hey, thank you guys. God bless you,” a man in a pickup says to Schuele after she tells him to pull ahead to receive his food.

Since June, a new mobile food pantry run by Catholic Charities in Omaha has been a blessing to residents of Macy and Walthill, two Thurston County communities located on the Omaha Indian Reservation. On the first Tuesday of each month, the volunteers carpool the 70-some miles up from Omaha and distribute food they’ve collected from sources in Omaha and from the Food Bank of Siouxland in Sioux City. They spend two hours in Macy and another hour in Walthill trying to address the county’s high rate of food insecurity, defined as a lack of access to culturally appropriate and nourishing food.

“Sometimes families have to choose between safety and nourishment, and we’re trying to alleviate that,” said Schuele, director of emergency and supportive food services at Catholic Charities.

For many years, Catholic Charities has supported a food pantry in Walthill that is open for a couple days later in the month. Schuele said it was obvious more aid was needed for Thurston County families.

“We became aware of the level of vulnerability these individuals are experiencing on a daily basis just by visiting Walthill,” she said.

For the past two years, Schuele and others worked to establish a mobile food pantry to visit the two communities. After securing the necessary resources, food supplies and volunteers, the mobile food pantry made its first visit in June, distributing food to 100 families. The number rose to 170 in July and 200 in August, a total that represents about 1,000 people.

The growing numbers are not only a sign of need, but the trust Catholic Charities has gained here. They’ve come each month except September, when a rash of COVID-19 cases forced them to cancel, rather than making a one-time visit and never returning.

“I think the fact we are coming consistently has had an impact on the community in gaining their trust,” Schuele said. “It’s something they can rely on.”

During Tuesday’s visit, volunteers enjoyed the warm, sunny fall morning while setting up, then carrying the food to open car doors and talking with local residents while they waited.

“It’s nice to know that we can be better brothers and sisters,” said Paula Lenz, a retired teacher from Omaha, as she pulled packages of diapers from boxes and handed them through car windows to thankful families.

“Tell your neighbors to come by. God bless you,” Lenz called out to each driver as he or she pulled away.

Judging by the increasing number of families each visit, Schuele said residents appear to be doing just as Lenz says, spreading the word to neighbors. Many here have no transportation, thus limiting their ability to access food. Schuele said she sees many drivers make repeat trips, bringing others who don’t have transportation to the food pantry so they can receive a box, too.

The smiles on the faces of those who come makes the early morning drive up from Omaha and the late afternoon drive back again worth it, Schuele said.

“This community is the most gracious community to be part of and come to,” she said. “I’ve never experienced the level of gratitude I’ve experienced in Walthill and Macy. It’s truly humbling.”

Though the mobile food pantry is still in its early stages, Schuele said she continues to assess it. Expanding the service to more days or other communities is a possibility.

“We’re always open to opening and expanding to more avenues to help the community,” she said.

Judging from the high turnout and grateful expressions on the faces of the local residents receiving the food, they’d welcome any expansion with open arms and wide smiles.

WASHINGTON — The U.S. Global Leadership Coalition (USGLC) is honoring Norfolk Mayor Josh Moenning for his work to advocate for U.S. global leadership as an imperative and effective approach to strengthening our country’s local communities.

Nothing puts a family in the Christmas mood like putting up a Christmas tree.

The Norfolk Arts Center has announced the winter art exhibitions featuring Anastacia Drake and Sally Jurgensmier. The free gallery opening reception will be Thursday, Dec. 9, from 5 to 7 p.m. in the NAC gallery.

LONDON (AP) — Britain’s Foreign Office abandoned many of the nation’s allies in Afghanistan and left them to the mercy of the Taliban during the fall of the capital, Kabul, because of a dysfunctional and arbitrary evacuation effort, a whistleblower alleged Tuesday.

Since the movie’s release in 1988, there has been much debate over whether the movie "Die Hard" qualifies as a Christmas classic.

Dictionary.com anoints allyship word of the year for 2021

NEW YORK (AP) — Allyship, an old noun made new again, is Dictionary.com's word of the year.

The public is invited to attend an upcoming meeting of a regional governmental body based in Madison County at which tax dollars may be spent.

Survivors gather to remember those lost at Pearl Harbor

“Cheugy” is apparently a lot to chew on. Grammy Award-winning singer-songwriter Billie Eilis…