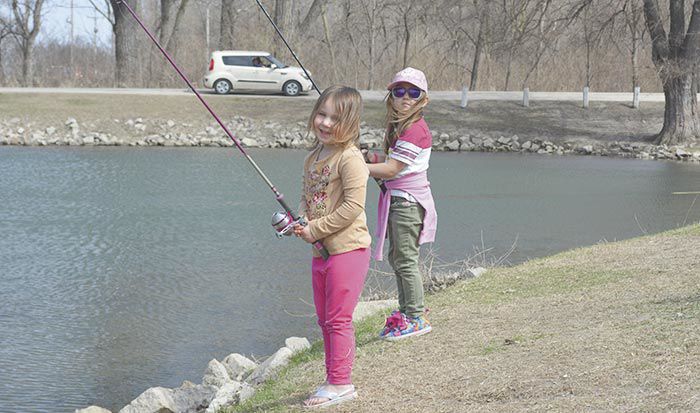 TWO SISTERS enjoy the day outside by fishing at Ta-Ha-Zouka Park in Norfolk last week. 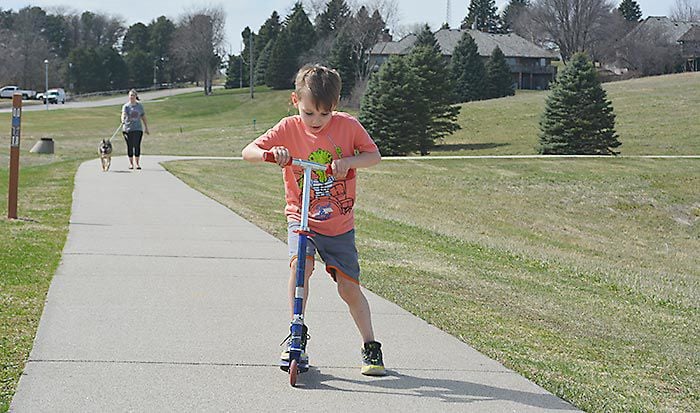 FAMILIES AROUND Northeast Nebraska got out of the house to enjoy the beautiful weather last week despite being in quarantine. This young boy, Camden Austin Grome, rides his bike at Skyview Lake in Norfolk, while his mother, Samantha, and dog tag along.

TWO SISTERS enjoy the day outside by fishing at Ta-Ha-Zouka Park in Norfolk last week.

FAMILIES AROUND Northeast Nebraska got out of the house to enjoy the beautiful weather last week despite being in quarantine. This young boy, Camden Austin Grome, rides his bike at Skyview Lake in Norfolk, while his mother, Samantha, and dog tag along.

This is the first in a two-part series of stories looking at mental health for both children and adults amid the COVID-19 pandemic and social distancing.

With classes shifted online and recommendations in place to social distance, kids have been staying at home without their normal routines, teachers or friends.

The recent changes could have an impact on a student’s mental health, said Tracie Chochon, a school psychologist for Norfolk Public Schools.

“For a lot of kids, school was a sanctuary. It was their safe place,” Chochon said. “They were taken care of, treated with respect, fed and their needs were being met. People cared about them. When you lose that, it will almost be like mourning. If you had a relationship with a teacher that cared, it would be really hard to adjust to suddenly not having that person.”

Chochon said she understands younger children might be affected more from social distancing and at-home learning than older students, who can use their cellphones and social media to connect.

There are several ways for parents to help their children stay positive during the coronavirus pandemic, Chochon said.

For younger children, parents should make sure to consistently have a one-to-one interaction, according to the Buffett Early Childhood Institute. It’s important to fulfill children’s basic physical and emotional safety needs first.

Exercise and nutritious meals are crucial, Chochon said. Children may go outside as long as they practice social distancing.

Young children take their cues from adults by what they read on their faces, according to the Buffett Early Childhood Institute. They feel stressed when their parents look stressed.

When basic needs are filled, structure, education and fun activities should be added. It’s important to have a routine in place, Chochon said.

Families should band together to complete puzzles, learn to bake, create do-it-yourself projects or make arts and crafts when their kids aren’t busy with schoolwork, she said. Younger children may use objects at home to create and play pretend.

Younger students can use a computer program called Seesaw and submit photos of their homework to their teachers, who then can offer feedback. Classmates also may interact with each other in the program.

“They can show off their work, and the teacher gets to brag them up on how they’re doing,” Luhr said. “If parents have questions, they reach out. For the most part, it's been positively received. Ideally, we’d love to have those babies in the classrooms.”

Marsha Bliss, a kindergarten teacher at Christ Lutheran in Norfolk, said she’s been in contact with all 14 of her students through email or Zoom.

Her students have been completing paper packet lessons and sending her photos of their favorite assignments. Bliss also scheduled her first Zoom call with the entire class this week and hopes to make it a weekly routine so her students can socialize.

“I think for the most part, from what I understand from parents, the kids are doing well,” Bliss said. “Parents are very involved — they’ve been communicating well, they ask questions over the phone or text me if they don’t understand. And most of the kids have siblings, so that helps some.”

If students are struggling with their mental health, there are still resources available even with at-home learning, Luhr said.

NPS students have access to teletherapy services through their school’s mental health provider. The district’s elementary schools are partnered with Midtown Health; the middle and junior high schools have services with Oasis Counseling; and the high school has therapists from Educational Service Unit 8 (ESU 8).

Chochon is a psychologist for three schools and also manages student threat assessments for the district. If a student is reported to be a threat, either to themselves or others, Chochon manages the assessment and treatment plan. A common threat is suicide, she said.

NPS had almost 20 risk assessments this year. Chochon is worried that the change to at-home learning might affect the ability to receive assessments, she said.

“When I get called into the schools, it's because that student has been reported to the administrator that a threat was made, and that’s not happening because they aren’t in school,” Chochon said. “For kids that were on the cusp of suicide, or depression, something like this just kind of tips the scales. Something like this happens and can push them over the edge.”

But teachers, who are usually the ones to observe threats, are still able to report them to administrators, Luhr said.

Chochon encourages parents to keep an eye on their child’s emotions, she said. Signs of depression or other mental health issues can be mood changes, excessive sleeping, weight changes or isolation. Because kids are staying at home, parents should be aware if they’re holing up in their bedrooms more than usual.

If parents have questions or concerns, they can always reach out to their child’s teacher or to the school, she said.

“I think the district has done a really good job to let parents know where they can find services for school work and mental health,” Chochon said. “Take it easy, parents. I think we have to make sure we give kids a sense of hope. They live in the moment, so it's hard for them to understand that this will pass.”

Dr. Connie Petersen and the staff at Behavior Health Specialists recently introduced a broader use of telehealth at the Norfolk clinic.

The public is invited and encouraged to attend an upcoming meeting of a regional governmental body based in Madison County at which tax dollars may be spent.

A man was killed in a crash Thursday night in Wayne County when he lost control of his vehicle and rolled into a ditch.

An air-conditioning issue led to a fire alarm activation on Friday.

SHAWNEE, Kan. (AP) — A Kansas judge is beginning to evict tenants who are behind on rent in advance of the expiration of a federal moratorium that some experts predict will bring a tide of people being forced from homes nationwide.

LINCOLN — The Nebraska State Patrol swore in a new class of troopers on Friday as members of the 64th basic recruit class received their badges and took the oath of office at the State Capitol.

The Daily News was again among the top winners in the Nebraska Press Association’s annual Better Newspaper Contest that were announced Thursday.

EDEN, N.C. (AP) — Three people are dead and two remain missing after a group floating down a river on inflatable tubes went over a dam in North Carolina, authorities said.

MIAMI (AP) — Forecasters predict a tropical system will bring heavy rain, storm surge and coastal flooding to the central Gulf Coast as early as Friday and throughout the weekend.

SHAWNEE, Kan. (AP) — A Kansas judge is beginning to evict tenants who are behind on rent in …

EDEN, N.C. (AP) — Three people are dead and two remain missing after a group floating down a…

MEMPHIS, Tenn. (AP) — Many Americans are relaxing precautions taken during the COVID-19 pand…

Rampaging bear in Japan injures 4 before being fatally shot

TOKYO (AP) — A wild brown bear on the loose in a city in northern Japan wounded four people,…