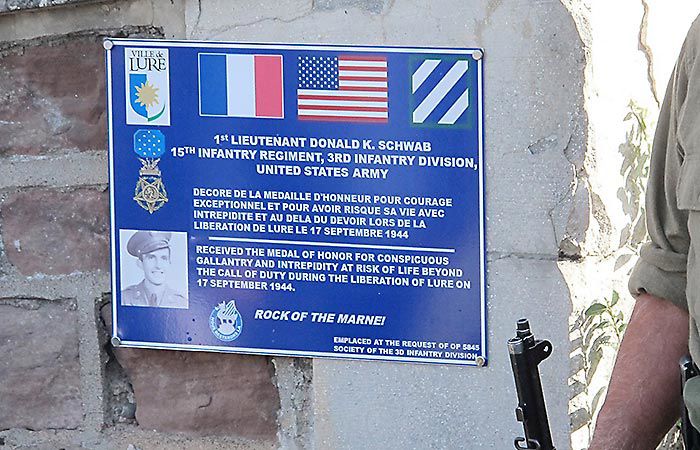 THE PEOPLE of Lure, France, posted this plaque in a town cemetery honoring the late U.S. Army Lt. Donald K. Schwab of Hooper who received the Medal of Honor posthumously in 2014 for his actions the day after the town’s September 1944 liberation. 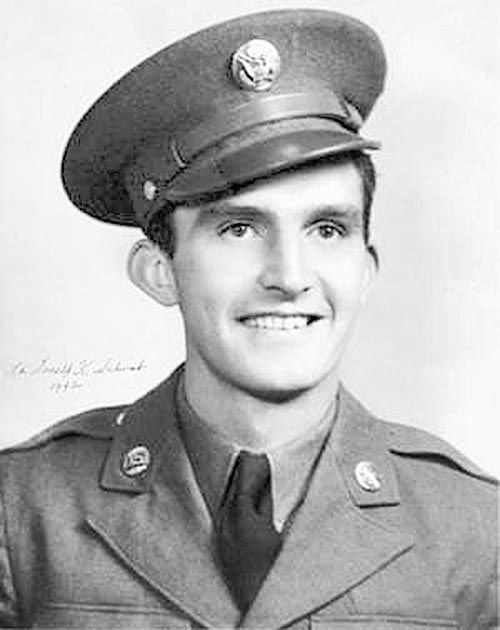 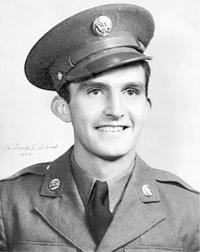 U.S. Army 1st Lt. Donald K. Schwab of Hooper shown here in his 1942 service portrait, posthumously received the Medal of Honor in 2014 for heroism in the aftermath of the 1944 liberation of Lure, France. Schwab died in 2005 at age 86.

THE PEOPLE of Lure, France, posted this plaque in a town cemetery honoring the late U.S. Army Lt. Donald K. Schwab of Hooper who received the Medal of Honor posthumously in 2014 for his actions the day after the town’s September 1944 liberation.

U.S. Army 1st Lt. Donald K. Schwab of Hooper shown here in his 1942 service portrait, posthumously received the Medal of Honor in 2014 for heroism in the aftermath of the 1944 liberation of Lure, France. Schwab died in 2005 at age 86.

At long last, Mary Beshaler of rural Arnold can picture what her father went through in World War II.

She and two of her four surviving siblings stood last month in a wooded area near Lure, France, one day less than 75 years after U.S. Army 1st Lt. Donald K. Schwab stormed a German machine-gun nest nearby.

They knew from their childhoods in Hooper, northwest of Fremont, that their dad had won the Distinguished Service Cross for his actions on Sept. 17, 1944.

But they didn’t know the whole story until 2014, when Schwab, also a Bronze Star winner, received the Medal of Honor nine years after his death at age 86.

Last month, as honored guests for the 75th anniversary of Lure’s liberation, Beshaler, brother Dr. Terry Schwab and sister Susan Bohling saw where their dad had risked his life and caused German defenders to flee.

“It bothered me how Dad survived that and how he faced death so many times that day,” said Beshaler, 64, who recently retired as a Callaway Public Schools counselor.

Her husband, John, came along on the 10-day French trip the family had contemplated since accepting the U.S. military’s highest award on their father’s behalf.

Thirty-one family members watched in the White House as then-President Barack Obama presented the medal on March 18, 2014. Schwab’s widow, Maralee, watched on television at a senior care center in Hooper. She died in 2017 at age 95.

Like many veterans of many wars, Donald Schwab mostly withheld the worst details of his experiences, Beshaler, Terry Schwab and Bohling said in a conference call.

But he’d tell war stories when asked, and he recorded many wartime memories on tape before he died.

Schwab had said the German soldier in the machine-gun nest he stormed would “have a bump on his head” if he were still alive, Beshaler said.

Then “he said, ‘Now we’re getting into the nitty-gritty.’”

He barely scratched the surface, his children said.

Schwab enlisted in June 1941, then sought officer’s training at the urging of older brother Virgil, a 1940 U.S. Military Academy graduate and Army Air Forces captain lost over New Guinea in 1942.

Commissioned a second lieutenant on Aug. 15, 1942, Schwab was sent to north Africa to join Company E of the U.S. 15th Infantry Regiment.

His unit, part of the Seventh Army’s 3rd Infantry Division, took part in the July 1943 invasion of Sicily and amphibious landings at Salerno and Anzio on the Italian coast.

From there, Schwab and his unit entered the Vosges Mountains, near where the borders of France, Germany and Switzerland meet.

The 3rd Division entered Lure, 50 miles west of that point, on Sept. 16, 1944. But German artillery kept shelling the town from the north, sending the Americans that way on Sept. 17.

He pulled them back, reorganized them, led them forward.

German fire erupted once more, and Schwab again pulled Company E back, going man to man and ensuring the safety of his wounded comrades.

Then “he got a direct order to take out the machine-gun nests,” Terry Schwab said.

Lt. Schwab gathered the remains of Company E for one more charge. Fifty yards from the Germans, he told his men to hit the dirt.

“While automatic weapons fire blazed around him, he rushed forward alone, firing his carbine at the German foxholes,” his Medal of Honor citation says.

“Silhouetted through the mist and rain by enemy flares, he charged to the German emplacement, ripped the half-cover off the hostile firing pit, struck the German gunner on the head with his carbine butt and dragged the German back through a hail of fire to friendly lines.”

Over the next few weeks, Allied forces trapped the German defenders in a pocket around the city of Colmar. As Schwab’s unit neared the town on Nov. 2, a machine-gun burst “about blew his right forearm off,” Terry Schwab said.

It earned him a third Purple Heart — and a trip home.

Back in Hooper by Christmas, Schwab shuttled between there and Topeka, Kansas, until his discharge on Oct. 23, 1945.

Around that time, he went to a dance and encountered Maralee Janssen, an old school acquaintance. They married in 1946 and had had six children and 17 grandchildren when he died.

Donald Schwab, who spent 30 years as a rural mail carrier, golfed and gardened despite his war wounds. A member of Hooper’s American Legion and VFW posts, he “never missed a military funeral,” Beshaler said.

His children were invited to Lure’s liberation celebration by historian Alain Guillaume, an internet acquaintance since reading a blog post by Terry’s daughter Savannah about her grandfather’s Medal of Honor.

Brother Dr. Rob Schwab and sister Ann McClusky couldn’t get away. But Sept. 16 found the others at a cemetery in Lure, where they helped dedicate a 3rd Infantry Division memorial plaque.

Their father’s service photo and story were there, too, on a separate plaque noting his Medal of Honor.

After an afternoon reception, Guillaume and Lure residents Claude and René Alam took Schwab’s children into the woods.

“There’s a little question about the location, because there are roads there (now) that weren’t there,” Beshaler said. But “we think we were pretty darn close, and John thought he saw foxholes in the woods.”

The Alam brothers told them about being nine and 10 years old during the battle. “They had American soldiers staying at their home,” Beshaler said. “Dad had even talked about staying in a home in Lure.”

She brought home some soil from the woods, where her husband had picked up a rock to take home.

They brought a town’s and nation’s gratitude home, too, even 75 years after the fact.

“We went through the line and shook everybody’s hands, and everybody said ‘Thank you,’” Beshaler said. “They were just so tickled that we were there, and we were treated so well by everyone.”

“They are so grateful still,” added Bohling.

Man sentenced after being convicted of beating unconscious man

OMAHA — Lorenzo Cook, 36, Macy, was sentenced on Thursday in federal court in Omaha for assault resulting in serious bodily injury.

No paper on holiday

Because of the Memorial Day holiday, the Daily News will not be published Monday.

OMAHA, Neb. (AP) — When Dr. Brian Boer got his first look at Nebraska’s first COVID-19 patient, he knew he had a battle on his hands.

Holiday amid pandemic: Americans divided on how to respond

NEW YORK (AP) — President Donald Trump played golf at one of his courses Saturday during the Memorial Day weekend as he urged U.S. states to reopen after coronavirus-related lockdowns. Yet many Americans remained cautious as the number of confirmed cases nationwide passed 1.6 million.

SAN FRANCISCO (AP) — The late San Francisco Chronicle columnist Herb Caen was fond of saying, “One day if I go to heaven … I’ll and look around and say, ‘It ain’t bad, but it ain’t San Francisco.‘”

Volunteers give away $25,000 in groceries

Cars were lined up throughout the parking lot of Fountain Point Medical Community as volunteers from Fountain Point and Life Point Church gave away 500 bags of fresh groceries from Lou’s Thrifty Way on Saturday morning.

Holiday amid pandemic: Americans divided on how to respond

Chad Lenox
was this week's winner.