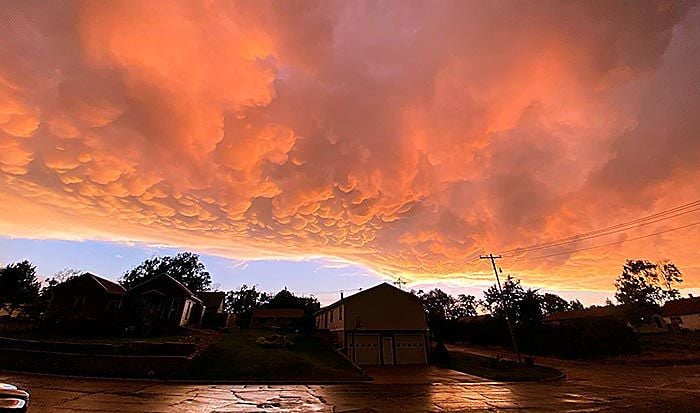 CLOUDS OVER Wauneta in southwest Nebraska Wednesday night. While it looked like it had potential to bring in some bad weather, the storm brought strong winds and a short downpour to the area. 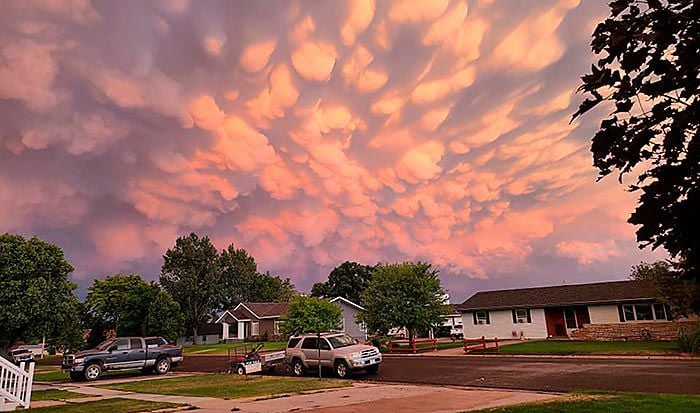 CLOUDS OVER Imperial in southwest Nebraska Wednesday night. While it looked like it had potential to bring in some bad weather, the storm only brought strong winds to the area. 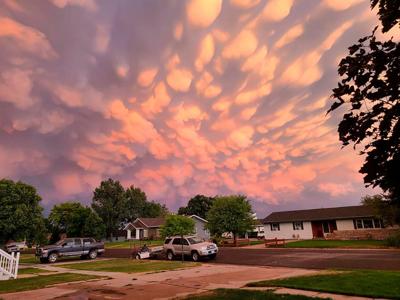 A line of thunderstorms that began in north-central Nebraska early Thursday brought high winds and heavy rains before moving southeast through the state.

"We had winds of 60 to 70 mph causing power outages and downed trees, mainly south of Interstate 80," said Jordan Thies, a meteorologist with the National Weather Service office in Hastings. The heaviest rains of 2 to 4 inches fell in a narrow swath in south-central Nebraska from Arapahoe to Red Cloud, he said.

Hastings reported up to a half-inch of rain, Thies said, while Grand Island had 1 to 1½ inches of rain.

Areas south of Columbus, in Genoa, Shelby and Silver Creek, had more than 2 inches of rain, Thies said.

In Omaha, Eppley Airfield reported just six-hundredths of an inch of rain, according to the National Weather Service office in Valley. Lincoln reported about the same amount.

About 1,600 OPPD customers were without power in Douglas County as of 8 a.m., but that number was down to about 400 by 8:30. Power outages due to weather also were reported in several central Nebraska communities, according to NPPD.

Other Nebraska locations according to the NWS:

O’NEILL — The North Central District Health Department has been made aware of six additional positive COVID-19 cases in Pierce County in the past day. Each case is due to close contacts with a positive case. All close contacts related with each case have been identified and asked to quarantine.

What do the kids say? K-12 students sound off on school

NEW YORK (AP) — Parents have weighed in on reopening schools. Teachers have weighed in. Public health experts, too, along with cities, states and President Donald Trump.

ROME (AP) — The number of confirmed coronavirus cases worldwide topped 20 million, more than half of them from the United States, India and Brazil, as Russia on Tuesday became the first country to approve a vaccine against the virus.

IOWA CITY, Iowa (AP) — Hundreds of thousands across the Midwest remained without power on Tuesday after a powerful wind storm packing 100 mph winds battered the region a day earlier, causing damage linked to the death of a woman found clutching a young boy in her storm-battered mobile home.

LOS ANGELES (AP) — Chris Pratt and Katherine Schwarzenegger say they are “beyond thrilled” and “extremely blessed” after she gave birth to their first child together.

Social distancing, cleaning and other operations might come a little easier to Norfolk’s parochial schools as they begin the upcoming fall semester during a COVID-19 pandemic.

Keeping small-town museum is a challenge in time of pandemic

TARNOV — They leaned how to drywall, hang and display artifacts and — if anyone needs a tour — they are usually the guides.

What do the kids say? K-12 students sound off on school