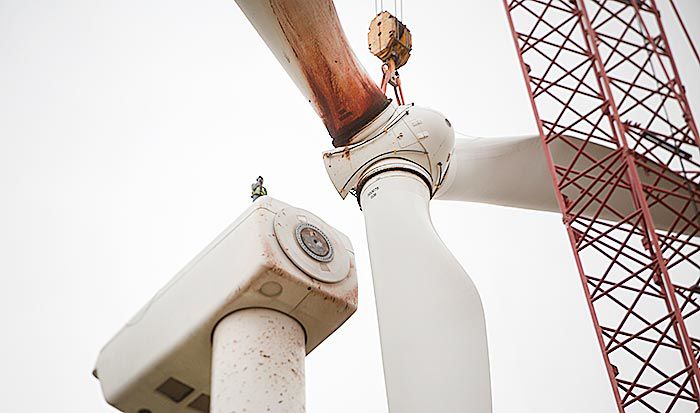 Old blades are marked and cut into thirds in Walnut, Iowa, before being transported to a landfill near David City in Nebraska. Only one facility in northern Iowa is currently taking the blades, while other landfills are assessing whether they will. 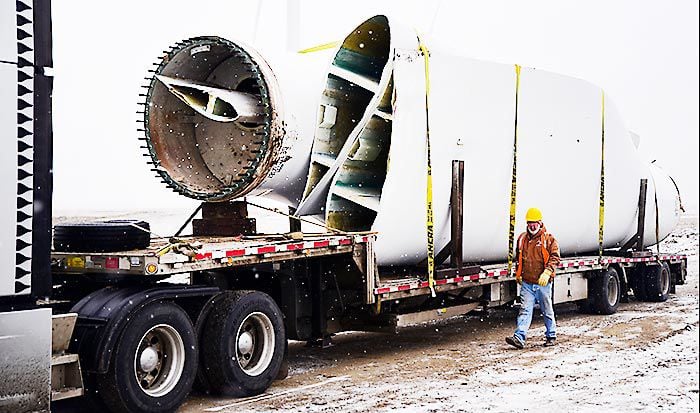 A worker monitors a hub replacement from atop a wind turbine in Walnut, Iowa. MidAmerican Energy’s wind farm in Walnut, Iowa, has started repowering turbines, some of which have had their original blades since 2004. Blades can weigh up to 11,500 pounds.

Old blades are marked and cut into thirds in Walnut, Iowa, before being transported to a landfill near David City in Nebraska. Only one facility in northern Iowa is currently taking the blades, while other landfills are assessing whether they will.

A worker monitors a hub replacement from atop a wind turbine in Walnut, Iowa. MidAmerican Energy’s wind farm in Walnut, Iowa, has started repowering turbines, some of which have had their original blades since 2004. Blades can weigh up to 11,500 pounds.

WALNUT, Iowa (AP) — At a western Iowa wind farm, a demolition crew saws through red slashes marked on 120-foot turbine blades, cutting them into thirds before stuffing the thinnest piece inside the base’s hollow cavity, giving workers room to load more blades onto a flatbed trailer.

But the upgrades for Iowa’s growing wind industry, which is already among the nation’s largest, are creating some unexpected challenges.

MidAmerican’s retired blades, destined for the Butler County Landfill near David City, Nebraska, about 130 miles away, are among hundreds that will land in dumps across Iowa and the nation. Critics of wind energy said the blades’ march to a landfill weakens the industry’s claim that it’s an environmentally friendly source of energy.

“This clean, green energy is not so clean and not so green,” says Julie Kuntz, who opposes a Worth County wind project. “It’s just more waste going in our landfills.”

Daniel Laird, a U.S. Department of Energy researcher, told The Des Moines Register that most of a turbine could be recycled, including “a lot of metal — steel and copper.”

He acknowledges, though, that disposing of the blades is a challenge. Wind energy generation, now topping 100 gigawatts nationally, will create 1 million tons of fiberglass and other composite waste, said Laird, director of the National Wind Technology Center at the National Renewable Energy Laboratory in Colorado.

“The scale of the issue is quite large,” said Laird, whose group is working to develop new blade materials that will enable reuse. “It’s quite a bit of material. And it’s a larger sustainability issue. We would like everything that’s manufactured to be reusable or recyclable.”

Disposing of turbine blades is an issue that will likely linger for years in Iowa and also in neighboring Nebraska. Large, investor-owned Iowa utilities are investing heavily in wind energy, as well as replacing blades to extend the life of older turbines.

MidAmerican will have spent $11.6 billion on wind from 2004 through this year, and Alliant Energy is spending $2.4 billion to build wind farms in Iowa. Iowa had 5,073 turbines last year, seven times more than in 2004, data from the U.S. Energy Information Administration show.

Kerri Johannsen, the Iowa Environmental Council’s energy program director, said more recycling solutions are needed. But, she added, it’s not a reason to “turn away from wind energy — a solution that can help mitigate the most dangerous threats from climate change.”

With older wind farms getting a power face-lift, Iowa landfills are just beginning to accept unwanted blades for disposal.

Landfill operators thought the composite blades, cut in 40-foot or larger sections, could be readily crushed and compacted. “But blades are so strong — because they need to be strong to do their job — they just don’t break,” said Amie Davidson, an Iowa Department of Natural Resources solid waste supervisor.

“Sometimes pieces fly off and damage equipment” in the compacting process, she said. “Landfills are really struggling to manage them, and they just decide they can’t accept them.”

So far, only one facility in north Iowa is taking the blades, while other landfills are assessing whether they will.

Bill Rowland, president of the Iowa Society of Solid Waste Operations, said he’s unsure “we as a society” considered what would happen to the blades as older turbines are repowered.

“One way or another, we have to deal with it as a state. They’ve been promoted. They’ve been built,” he said. “In our opinion, there needs to be a way to handle the waste that’s derived from them.”

The difficulty in reusing blades adds to the complaints opponents make against wind energy. Some who live near the turbines complain that low-frequency noise and light flickering from the blades make them ill. And the spinning blades can kill migrating birds and bats.

Blade disposal is “just one of many factors we’re concerned about,” said Kuntz, the Worth County wind farm opponent.

Des Moines-based MidAmerican, which began building its own wind farm in 2004, said it relies on wind turbine manufacturers — who then hire contractors — to decide how best to dispose of old blades, hubs and electronics in the nacelles.

When it started investing in wind, the utility believed a blade recycling option would emerge. “Thus far, it hasn’t,” said Geoff Greenwood, a spokesman for MidAmerican, adding that the company is talking with other wind developers that may be interested in using the blades for their own projects.

In South Dakota, Donny Kuper, superintendent of the Sioux Falls Sanitary Landfill, said the landfill created new requirements for accepting turbine blades after studying how much space 100 blades from an Iowa wind farm took up.

Concerned that accommodating the massive pieces will shorten the life of the landfill, Kuper said, the operation will require the blades to be cut up in smaller pieces so that they can be compacted like other waste.

That should make it easier and safer for Kuper’s crew to manage the blades, one of which got caught in a 120,000-pound compactor wheel. It flew up and broke the machine’s windshield, idling the $900,000 piece of equipment for a week.

“There’s definitely risk involved,” Kuper said. “The blades themselves are pretty slick, so compactors can get on top of a blade and slip off. It’s not happened to us, but I’ve heard it happened in other landfills, where a compactor has tipped over.”

The Waste Management facility near Lake Mills in north Iowa is accepting the blades, but its workers are “shearing” them — or cutting them into smaller pieces, said Julie Ketchum, a Waste Management spokeswoman.

The facility takes in about six blades a day, or the equivalent of two wind turbines, she said.

DNR’s Davidson said other landfills are discussing whether they can accept the blades. One of the issues that has emerged is who should be responsible for cutting the turbines into smaller pieces, she said.

“We can’t make anybody take a waste,” so it’s up to individual landfills to decide if they will accept blades, she said.

Davidson said she’s unsure whether many recycling options are available. DOE’s Laird said most uses involve cutting up the material and using the pieces in other products. But it’s still unclear whether that’s financially viable over the long term.

Global Fiberglass Solutions of Bothell, Washington, said it recycles wind turbines, planes, boats and other fiberglass products in Newton, Iowa, and Sweetwater, Texas. The company didn’t return calls asking for more information but said on its website it uses recycled fiberglass to make other products.

The problem with recycling blades, Laird said, is that there is no easy way to separate the materials used to make it.

Using food analogies, he said some materials in the blades are like a fried egg. Once they’re cooked, they can’t be changed. If those materials were more like chocolate, they could be melted, reformed and used to make something else.

His team is working to see if blades can be manufactured differently, maintaining their toughness while allowing for reuse when they’ve done their job. The blades must be able to last 30 years under stressful conditions.

MidAmerican’s Greenwood said the utility plans to spend $2.3 billion to repower 1,215 turbines across the state through 2022.

Consumers will pay none of the wind costs, Greenwood said. In fact, MidAmerican has said the utility will receive about $10 billion in federal production tax credits for the investment, covering the capital costs needed to build the wind farms.

MidAmerican Energy has set a goal to create as much energy from wind as its 770,000 Iowa electric customers use over a year. So far, it’s reached about 50%.

Despite the big investment, coal is still Iowa’s largest source of energy to produce electricity, followed by wind and other renewable energy and natural gas. Iowa gets 34% of its electricity from wind, the second-largest proportion in the nation after Kansas at 36%.

Michael McCoy, executive director of the Metro Waste Authority in Des Moines, said Iowa needs to figure out how best to recycle the blades, given wind energy’s growing presence.

“Whether it’s blades or tires, we’d rather see materials recycled. But you’ve got to have an end market for that, and I’m not sure” there is one, said McCoy, whose operation is beginning to discuss if it would take blades.

“I’d be interested in finding out if they can be grinded … but a grinder would have to be massive. The question would be: ‘At what cost?’ ” McCoy said, adding that he would like to bring utility executives, landfill operators, researchers and other leaders together to discuss ways to recycle the blades.

Frank Peters, an Iowa State University associate professor of industrial and manufacturing systems engineering, said graduate students looked at whether chopped-up blades could replace gravel in making concrete. But it wasn’t financially viable, given how much energy was needed to process the blades.

“Unless there’s a better solution, they are going to get landfilled,” Peters said. “But if you look at the total economic and environmental costs of reprocessing that blade, landfilling may be the best solution.”

AUCKLAND, New Zealand (AP) — An emotional Elton John had to cut short a performance in New Zealand on Sunday after he lost his voice due to walking pneumonia and had to be assisted off stage.

INCHEON, South Korea (AP) — Director Bong Joon-ho smiled and waved at a waiting crowd on Sunday as he arrived home in South Korea, his first trip back since he won four Oscars for his movie “Parasite,” including the award for Best Picture.

JACKSON, Miss. (AP) — Days and days of heavy rain have created a dilemma for authorities managing dams along swollen rivers in Mississippi and Tennessee. The water has to be released eventually, worsening the flooding for people living downstream.

LAKELAND, Fla. (AP) — A Florida city shut down a section of a lake Thursday after receiving reports of swarming snakes. Turns out, the slithery creatures were just celebrating Valentine’s Day a little early.

Trading quarantines, Americans from cruise land in US

JoBeth Cox, who has managed the Elkhorn Valley Museum for the past two years, will be leaving her position at the end of the month.

JACKSON, Miss. (AP) — Days and days of heavy rain have created a dilemma for authorities man…

Trading quarantines, Americans from cruise land in US