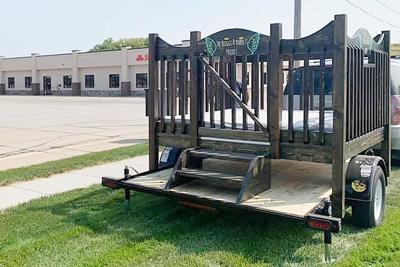 Just a few years ago, Melissa West and Allison Uecker both experienced every parent's worst nightmare: the loss of a child.

Following the death of their sons to Sudden Infant Death Syndrome, West and Uecker co-founded the Briggs & Barrett Project, which provides support, education and resources to Norfolk-area families.

"(We) had to let others know they are not alone," Uecker said.

Now, with help from sponsors Premier Marketing and Raising Cane's, the Briggs & Barrett Project is holding a diaper drive. All of the collected diapers will be given to future Baby Crashers recipients.

Earlier this week, West and Uecker bought their first round of diapers with money collected from friends, coworkers, family and supporters of the Briggs & Barrett Project.

“It was unbelievable; we sold a Target out of their Target brand diapers,” West said. “We will be going again Friday night to buy our second round of diapers from additional funds that have been donated this week toward the drive.”

Those interested in donating may drop off diapers at the giant crib parked at Premier (705 W. Benjamin Ave.) through Friday and then near Raising Cane's (1150 S. 13th St.) on Saturday or make a 15% purchase donation by mentioning the Briggs & Barrett Project when placing an order. The drive runs through Saturday, Sept. 12.

The family was nominated by friends and family after their hard times of infertility, stillbirth and miscarriage. Last December, Baby Crashers were sent out to surprise the family with baby items for their unborn baby that would be arriving soon.

"The anxiety of being pregnant after having lost two babies is so high, you're constantly thinking of all possible outcomes," Conyers said. "… There are not enough words to express how grateful we are."

Throughout the year, donations may be made on the Briggs & Barrett Project website briggsandbarrettproject.com.

BOSTON (AP) — Distance running, traditionally one of the world’s most genteel sports, has been roiled by an ugly mid-pandemic squabble over who should get a shot at a coveted Boston Marathon medal.

US jobless claims tick up to 745,000 as layoffs remain high

WASHINGTON (AP) — The number of Americans applying for unemployment benefits edged higher last week to 745,000, a sign that many employers continue to cut jobs despite a drop in confirmed viral infections and evidence that the overall economy is improving.

CAPE CANAVERAL, Fla. (AP) — SpaceX’s futuristic Starship looked like it aced a touchdown Wednesday, but then exploded on the landing pad with so much force that it was hurled into the air.

US traffic deaths spike even as pandemic cuts miles traveled

DETROIT (AP) — Pandemic lockdowns and stay-at-home orders kept many drivers off U.S. roads and highways last year. But those who did venture out found open lanes that only invited reckless driving, leading to a sharp increase in traffic-crash deaths across the country.

Eager to act, Biden and Democrats leave Republicans behind

WASHINGTON (AP) — President Joe Biden and Democrats in Congress are jamming their agenda forward with a sense of urgency, an unapologetically partisan approach based on the calculation that it’s better to advance the giant COVID-19 rescue package and other priorities than waste time courting…

A man who had a protection order filed against him last week was arrested Monday for allegedly violating that order.

US jobless claims tick up to 745,000 as layoffs remain high

US traffic deaths spike even as pandemic cuts miles traveled

Eager to act, Biden and Democrats leave Republicans behind