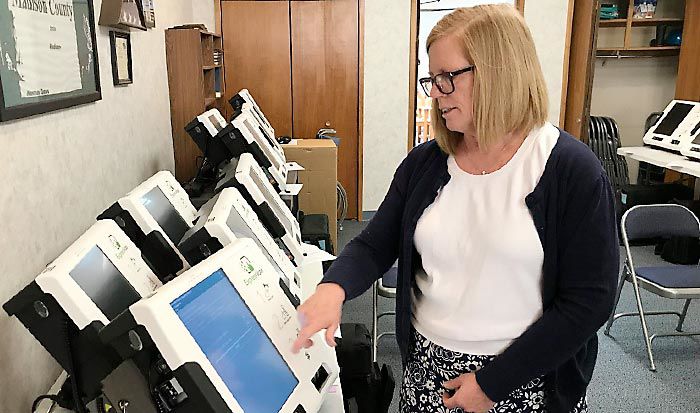 ANNE PRUSS, county clerk and election commissioner, demonstrates one of the 23 Express Vote machines Madison County will use for the May 12 primary election. 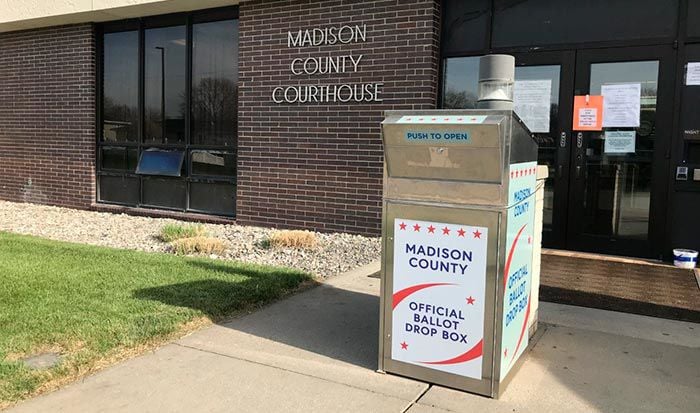 THOSE WHO are voting by mail are reminded that ballots must be in the Madison County Courthouse by Tuesday, May 12, at 8 p.m. Ballots may be mailed in or dropped off in the drop box on the south end of the courthouse.

ANNE PRUSS, county clerk and election commissioner, demonstrates one of the 23 Express Vote machines Madison County will use for the May 12 primary election.

THOSE WHO are voting by mail are reminded that ballots must be in the Madison County Courthouse by Tuesday, May 12, at 8 p.m. Ballots may be mailed in or dropped off in the drop box on the south end of the courthouse.

MADISON — Anne Pruss still has not had much time to catch her breath.

Pruss became the Madison County clerk in 2019. That March, she presided over several emergency measures with the county board related to flooding, especially washed-out roads and bridges.

In Madison County, like many Nebraska counties, the county clerk also serves as election commissioner. That means Pruss also is presiding over her first election this year, with COVID-19 throwing a wrench in the well-oiled machine that has been established for voting procedures.

Pruss replaced Nancy Scheer in 2019. Scheer was elected clerk in 1986 and had worked in the office under David DeCamp for 12 years before that.

While Scheer remains on staff to assist, it’s different being the one in charge. For Pruss, that means finding poll workers willing to work during a pandemic.

Throw in some new voting machines paid for by the state designed to make elections safer and more efficient, and it is enough to make a lot of people pull their hair out.

On Tuesday, the county board received an update from Pruss on how preparations are going for the Tuesday, May 12, primary.

Pruss said she appreciates all the residents who have decided to vote by mail. As of Tuesday morning, the county already had received requests and mailed out 7,264 ballots. Of those, 4,321 ballots have been returned. The county has more than 19,600 registered voters.

Pruss said she has enough workers at the polling sites around the county. It will not look like the typical polling booths this year, although the sites are mostly the same.

The poll workers this year will be wearing face shields, masks and gloves and will be routinely wiping down surfaces. Voters will keep the pen after they have voted, Pruss said.

In addition, voters are being encouraged to wear masks. And while polling sites may have more than 10 people gathered, social distancing measures will be in place.

That means people will see arrows and lines that tell them where to stand and directions to follow to vote, she said.

The county has 15 voting sites, with a couple of changes since 2018.

Those who live in Norfolk Ward 3, Precinct 3 will not vote at The Meadows because of the threat of the coronavirus to residents. Instead, they will vote at Westridge United Methodist Church, 2000 W. Norfolk Ave., Pruss said.

In addition, those in Norfolk Ward 1, Precinct 2 who voted in 2018 at the Norfolk City Council chambers because the Norfolk Public Library was under construction will return to the library this year, Pruss said.

All other voting locations throughout the county will remain the same.

Pruss said if people are mailing the ballot back rather than dropping it off, she would recommend that they send it four to six days prior to May 12 to ensure it gets to the courthouse in time to be counted.

Troy Uhlir, county board chairman, said he has been asked by some people if they requested to vote by mail but now want to vote in person, can they?

Pruss said she would recommend that they follow through and vote by mail. If they lost the ballot or it got destroyed, however, they can go to their polling place and sign an affidavit stating that they have not voted and still cast a ballot.

Uhlir said for those who might be wondering, it is illegal to both vote by mail and then vote in person. Pruss said her office does check voting records as well.

In Nebraska, any person who votes more than once at the same election shall be guilty of a Class IV felony.

The first concert in over a year by the Norfolk Area Concert Association will open Saturday, Oct. 23, at 7:30 p.m. at the Johnny Carson Theatre.

A Hadar man was among those killed in a shooting Thursday afternoon at a Superior grain elevator.

ST. PETERSBURG, Fla. (AP) — Family members were hoping for more answers from law enforcement regarding the cause of death for Brian Laundrie, who was a person of interest in the death of girlfriend Gabby Petito while the couple was on a cross-country road trip, an attorney said Friday.

WASHINGTON (AP) — Children ages 5 to 11 will soon be able to get a COVID-19 shot at their pediatrician’s office, local pharmacy and potentially even their school, the White House said Wednesday as it detailed plans for the expected authorization of the Pfizer shot for elementary school young…

Agenda for upcoming college board of governors meeting

The public is encouraged to attend an upcoming meeting of Northeast Community College Board of Governors during which tax dollars may be spent or decisions made that affect expenditures.

Tiny wrists in cuffs: How police use force against children

CHICAGO (AP) — Royal Smart remembers every detail: the feeling of the handcuffs on his wrists. The panic as he was led outside into the cold March darkness, arms raised, to face a wall of police officers pointing their guns.

The Nebraska State Patrol is investigating a shooting incident that occurred in Superior on Thursday afternoon. There is no active threat to the public at this time.

WASHINGTON (AP) — President Joe Biden and Congress' top two Democrats strategized Friday trying to wrap up their giant domestic legislation, as the party continued scaling back the measure and determining ways to pay for it after months of deadlock.

Where are the workers? Cutoff of jobless aid spurs no influx

China vows no concessions on Taiwan after Biden comments

COLUMBUS, Ohio (AP) — Ohio’s debut of its new license plate failed to take off — because a b…

"You should probably be wearing a mask so you don't give anybody 'cat scratch fever.'"

Anne Vrbicky
was this week's winner.