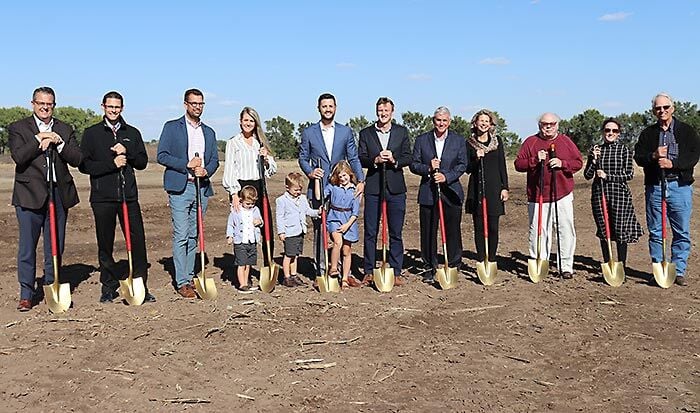 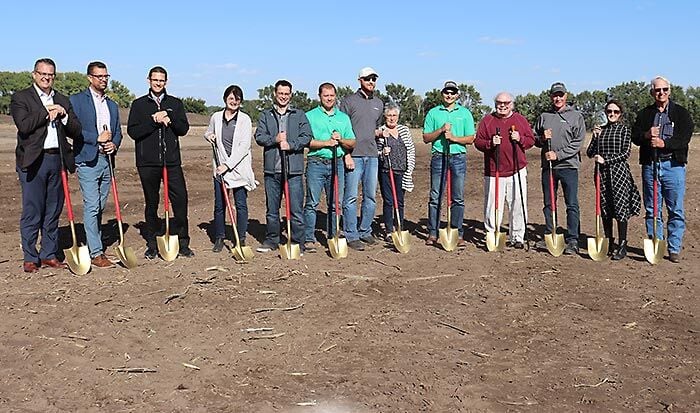 A ceremony was held Wednesday afternoon to commemorate the groundbreaking of Bradford Business Park, a new commercial business venture in western Norfolk.

The ceremony, held at the Norfolk Public Library after an on-site groundbreaking was canceled because of concerns about high winds and dirt at the construction site, honored the individuals and businesses that helped make the development a reality.

Norfolk Mayor Josh Moenning said the purpose of the business park is to make the city more attractive to new and expanding businesses, as a problem many businesses face in Norfolk is simply a lack of space.

“We had a shortage of land that was developable and shovel-ready with the right infrastructure in place,” Moenning said. “Without this, it was hard for businesses to come here or existing businesses to move in a timely fashion.”

The process to develop the business park was then launched, which ultimately took three years to come to fruition.

“It’s been a long process, it’s taken a lot of partnerships, but it’s involved people who were willing to look beyond self-interest and short-term profit motive and what was right and necessary to make the project work,” Moenning said. “Driven by a long-term interest in the community. That’s what makes this project special.”

Russ Wilcox, chairman of the Greater Norfolk Economic Development Foundation, said in particular the financial partners were a significant help, as they took on risk to help the project.

The development's first tenants were announced at the ceremony: Heartland Beverage, a beverage distribution company originally founded in O’Neill as Adamson Distributing; and FieldWise, an agricultural technology company founded in Ewing.

Both were described by Moenning as good fits for the first businesses to reside at the business park, as they represent local, family-owned and innovative companies that will benefit Norfolk and Northeast Nebraska.

“The two businesses embody the very body and spirit and what we’re hoping to promote,” Moenning said. “Family-owned small businesses are the heart of our local economy.”

Representatives from the companies spoke briefly and said they were looking forward to doing business in Norfolk.

Also honored was Jim Bradford, whose family owned the land at 37th Street and Omaha Avenue. Bradford’s family name is not only the namesake for the park, but the new street of Bradford Avenue also will be named in his honor.

Wilcox said Bradford was instrumental in the development of the business park.

“We originally had this idea, and Jim (Bradford) was one of the first people to say, ‘Here’s a way to get from Point A to Point B,’ ” Wilcox said.

Bradford said the project was a rewarding experience, especially with all of the community involvement.

“It’s been a great and fun project,” Bradford said. “It’s been a community deal, with lots and lots of people involved in this.”

County to begin work on Old Hadar Road next week

One of the most highly anticipated Madison County road construction projects in recent years is scheduled to get started next week.

Listed below is the 24-hour rainfall in inches as of 7 a.m. Friday in area communities.

The City of Norfolk held an open house Thursday to showcase the Benjamin Avenue improvement project.

A two-vehicle accident occurred at the intersection of Highway 275 and Pasewalk Avenue at about 10:40 a.m. Thursday.

LONDON (AP) — Prince Philip, the irascible and tough-minded husband of Queen Elizabeth II who spent more than seven decades supporting his wife in a role that both defined and constricted his life, has died, Buckingham Palace said Friday. He was 99.

BEIJING (AP) — China accused the U.S. of causing humanitarian disasters through foreign military interventions in a report Friday that was the latest broadside by Beijing in increasingly contentious relations with the Biden administration.

MINNEAPOLIS (AP) — George Floyd died of a lack of oxygen from being pinned to the pavement with a knee on his neck, medical experts testified at former Officer Derek Chauvin’s murder trial, emphatically rejecting the defense theory that Floyd’s drug use and underlying health problems killed him.

Ready to buy a home? The trick is finding or affording one