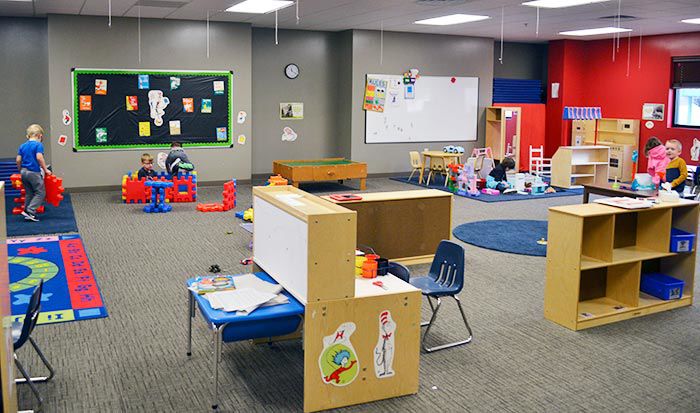 NORFOLK DAYCARE FACILITIES like Helping Hands Child Care are experiencing low attendance due to the COVID-19 outbreak. A room that usually holds about 30 children inside Helping Hands is shown. 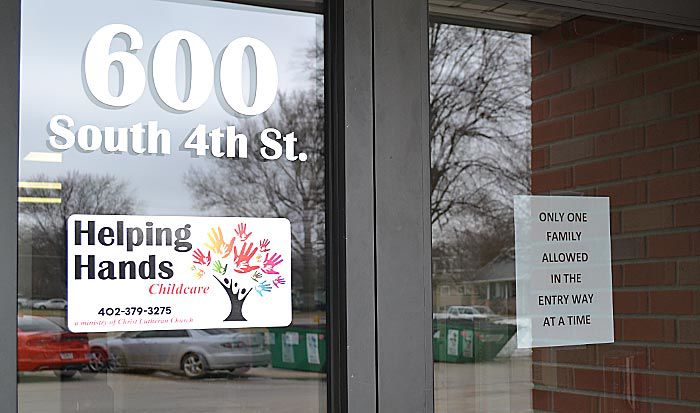 ONLY ONE PARENT at a time is allowed to come inside Helping Hands Child Care. Each visitor has to wash or sanitize their hands, and staff have to disinfect after every child. 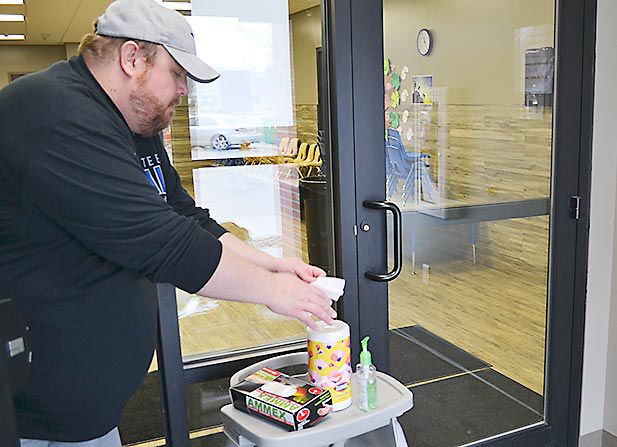 NORFOLK DAYCARE FACILITIES like Helping Hands Child Care are experiencing low attendance due to the COVID-19 outbreak. A room that usually holds about 30 children inside Helping Hands is shown.

ONLY ONE PARENT at a time is allowed to come inside Helping Hands Child Care. Each visitor has to wash or sanitize their hands, and staff have to disinfect after every child.

This decision is crucial for local families who can’t work from home during the COVID-19 outbreak, said Chad Bryant, director of Helping Hands Child Care, which is associated with Christ Lutheran Church.

“When the school closing (notice) came out, we thought that it would apply to schools and child care, but it wasn’t the same,” Bryant said. “There hasn’t been a lot of information as to why, other than the knowledge that if all these child care (facilities) also shut down, what do they do for nurses, doctors, first responders, people working in grocery stores and city workers? There’s a lot of families who have dual-working parents, and they need care.”

Nebraska is one of the top states in the U.S. where all available parents are in the workforce, according to the Buffett Early Childhood Institute. About 75% of children under the age of 6 live in homes where all adults in their family work outside the home.

Unlike schools, child care facilities are able to maintain the 10-person limit the Nebraska Department of Health and Human Services issued March 18. A maximum of 10 children at a time are allowed in one room.

Helping Hands’ main issue has been attendance, Bryant said. The daycare usually serves around 125 children, from ages 6 weeks to 12 years.

Now with the 10-child limit, the maximum number of children Helping Hands can care for is 41.

Children deemed high-risk have been asked to stay home, and the center also has temporarily stopped serving school-age children.

Sudbeck manages 40 staff members, and some of them chose not to come into work to balance out the low attendance.

“I haven’t had to tell anyone they can’t come yet because they are choosing to stay home,” Sudbeck said. “So far we’re OK, but if more kids (chose not to come), more (staff) will have to choose to stay home, or I’ll have to find something for them to do.”

Both Sudbeck and Bryant said parent feedback is filled with uncertainty.

Parents are concerned about how they will pay for child care if they can’t work because of the virus outbreak, Bryant said.

“A lot of people don’t know where the next paycheck may be coming from,” Bryant said. “Or how many hours they are going to get. It’s a big question for us to answer, and we’re trying to keep everything going as much as possible. Families have been sharing with us that they are nervous, concerned and worried.”

The Helping Hands board is discussing how to handle payments for parents, but there are no official answers yet. Bryant said Christ Lutheran and Helping Hands always try to be flexible.

Northern Hills requires parents to pay for at least 30 hours a week. The center is working to reduce that minimum in the near future, Sudbeck said.

All child care facilities in Madison County are encouraged to follow strict regulations from the Elkhorn Logan Valley Health Department starting Monday to prevent virus spread, according to a media release.

Helping Hands started an advanced protocol on Monday that involves not allowing more than one parent in the building’s entry and all visitors must wash or sanitize their hands before entering the building.

Children drop-off and pick-up has also become a lengthy process. When children are brought to the doorway, a staff member takes each child into the building and washes his or her hands. Before another child comes in, all the surfaces the previous child touched is disinfected.

Staff members are also visibly checked and have to take their temperature before starting their shifts, Bryant said.

Northern Hills has a similar disinfection protocol, Sudbeck said. Trips to the bathroom and playground are carefully planned.

For both facilities, children aren’t allowed to congregate in the main areas and instead must stay inside classrooms in groups of 10. Staff can’t co-mingle.

“We try to run a center that is homey, and you see a lot of people talking, laughing and working together out in the main spaces,” Bryant said. “When you come in here in the next weeks, it’s going to look like a ghost town.”

Sudbeck said she asks for hand sanitizer each time she orders supplies, but each time her supplier says they’ve run out.

“I’m just waiting it out and trying to be patient,” Sudbeck said. “We’re relying on the other businesses. The ones that stay open, we’ll keep their kids. If they don’t shut down, then we can’t shut down. I’m planning on staying open until the health department tells me I have to close. But until then, we’ll be there for those who need it.”

About 6,500 athletes who already have earned their spots for the Tokyo Games are in for 2021 under redrawn qualifying regulations published Tuesday by the International Olympic Committee.

A sixth grade student from Pierce Elementary is making a difference by creating face masks for her local community.

Portia de Rossi has been teaching herself how to cook during the coronavirus lockdown. It’s been an eye-opening experience for the actress — and for her fans.

WASHINGTON (AP) — Senate Democratic Leader Chuck Schumer is calling for up to $25,000 “heroes” pay for frontline health care and service industry workers, as Congress pushes ahead with a new coronavirus crisis rescue package.

Salvation Army helping those in need during pandemic

In the weeks since the coronavirus pandemic began, there are more people who need a little extra help keeping their families fed and healthy.

Patti Gubbels is running for a seat on the Nebraska State Board of Education in District 3, a position held by Rachel Wise.

About 6,500 athletes who already have earned their spots for the Tokyo Games are in for 2021…