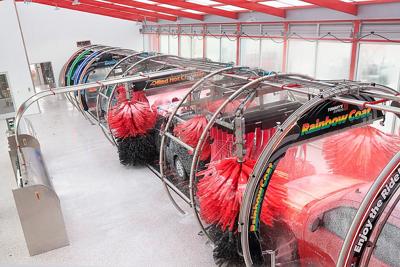 A new wave in car washing will bring big changes for a restaurant that has been part of the Norfolk dining scene for more than 40 years.

Jesse Pick, manager of Valentino’s in Norfolk, announced this week that the property at 1025 S. 13th St. — where the Italian restaurant has operated since the early 1980s — had been sold. The sale will make way for the construction of a new Tommy’s Express Car Wash.

“It’s going to be a whole different thing,” Pick said.

The Norfolk restaurant franchise was purchased by Wade and Curt Blackman, who own the Jerry’s Sinclair station located just south of Valentino’s current location. A portion of that station is being remodeled and will become the new home for Valentino’s new carry-out, delivery and catering operation.

“There’s no dining room,” Pick said. “We will be expanding on carry-out. We will be doing breakfast and experiment with a few other things.”

Breakfast pizzas and biscuits and gravy will be on the menu for early in the day. The menu also will include express options like pizza by the slice and combo meals.

The last day for the restaurant’s current location will be March 28. Shortly thereafter, construction will commence on Tommy’s Express Car Wash.

Ben Conover and Matthew Preister are two of the founding partners of Nebraska Tunnel Wash I; they are working on bringing the Michigan-based tunnel-wash franchise to Norfolk.

It’s a goal Conover said they had been working on “for a number of years.”

Conover said the purchase of White Water Wash — a single-bay automatic wash in Woodland Park — about five years ago made him question why customers should spend so much time in line waiting for a car wash.

Tommy’s Express is a membership-based business with locations nationwide, including several that are operational or in the construction phases in Nebraska.

The 130-foot-long tunnel can wash about 200 cars in an hour: “It’s faster than getting a cup of coffee at McDonald’s,” Conover said.

The business also will include free vacuums and mat washes for members. Single-pay wash options also will be available, he said.

Conover said the new car wash would employ up to 20 people and be open from 7 a.m. until 9 p.m. daily — even in extremely cold conditions.

“I think it will catch on quick,” Conover said. “It will change people’s habits. Instead of waiting in line, you’ll get through as fast as you get there.”

A man who was projected to be discharged from parole in September 2022 was arrested Monday afternoon.

Nothing puts a family in the Christmas mood like putting up a Christmas tree.

LONDON (AP) — Britain’s Foreign Office abandoned many of the nation’s allies in Afghanistan and left them to the mercy of the Taliban during the fall of the capital, Kabul, because of a dysfunctional and arbitrary evacuation effort, a whistleblower alleged Tuesday.

A Beemer man was killed Thursday in a farm accident at his property in rural Beemer.

Students to highlight conducting at concert

Ten Wayne State College students will show off their conducting prowess during a concert on Tuesday, Dec. 7, at 7:30 p.m.

MOSCOW (AP) — President Joe Biden and Russian President Vladimir Putin will speak by telephone on Tuesday as tensions between the U.S. and Russia escalate over a Russian troop buildup on the Ukrainian border seen as a sign of a potential invasion.

Survivors gather to remember those lost at Pearl Harbor

“Cheugy” is apparently a lot to chew on. Grammy Award-winning singer-songwriter Billie Eilis…