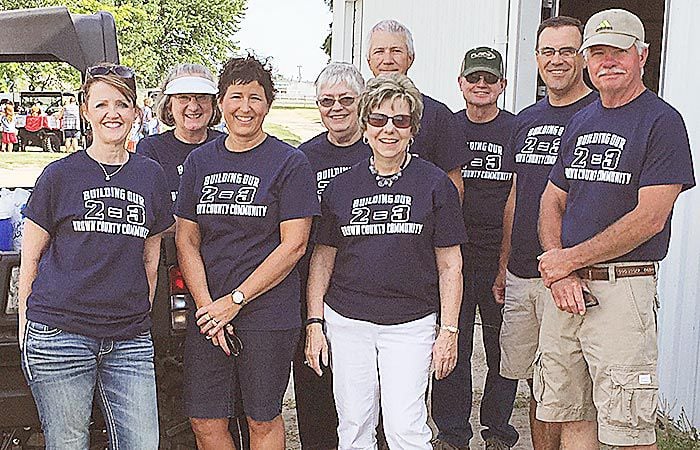 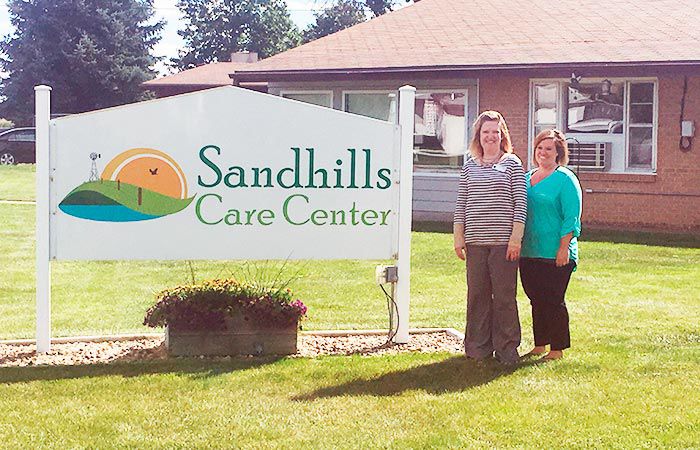 Sandhills Care Center administrator Stephanie Rucker (left) is pictured with Chelsea Hladky, director of nursing, in front of the nursing home that was reopened in Ainsworth in November 2016. The Brown County Community Foundation Fund worked together with numerous public and private partners to make it possible.

Sandhills Care Center administrator Stephanie Rucker (left) is pictured with Chelsea Hladky, director of nursing, in front of the nursing home that was reopened in Ainsworth in November 2016. The Brown County Community Foundation Fund worked together with numerous public and private partners to make it possible.

AINSWORTH — When the Ainsworth Care Center, a privately-owned skilled nursing facility, closed in 2015, it was an unexpected shock.

And not just to the residents and employees, but also to the entire health care community and the people of Brown County.

Staff members were left unpaid. Residents and their families were left with an uncertain future.

But as with other challenges and opportunities that have arisen, the people of Brown County came together to address a critical situation.

Through an interlocal agreement, the City of Ainsworth and Brown County assumed ownership and established a board of directors to get the facility up and running again.

Stephanie Rucker, an optometry billing manager from Gordon, was hired as administrator. Rucker's mother had managed the nursing home in Gordon for 18 years. That gave Rucker a deep appreciation for the commitment that drives high-quality caregiving. She began work at the newly renamed Sandhills Care Center in July 2016.

"There was renovation work being done, plus the center needed to start from the ground up with new administrative policies and procedures," she said.

"When I first walked into the facility, it was a disaster. There were still dishes and cups of coffee left out in the kitchen. When the owners abandoned the center, employees were left to take care of the residents until they could be moved temporarily to other facilities. Many employees were devastated. They were left without jobs, without paychecks, and without knowing what the future would be," Rucker said.

The community stepped up with a helping hand.

The North Central Nebraska Development Center, which has its headquarters in Ainsworth, launched a relief fund to help those who were suddenly left without incomes. A grant of $10,000 from the Brown County Community Foundation Fund — an affiliated fund of Nebraska Community Foundation — helped pay for immediate improvements needed to reopen the center.

Some of the affected employees eventually took jobs in other communities, but some returned to work at the Sandhills Care Center when it reopened in late 2016.

"In November, we will have been open for one year," Rucker said. "We've worked hard to build a reputation of providing the quality of care residents and their families deserve in a facility.

“At first, there was some hesitation for some former residents, but we're getting positive feedback. Families are seeing the difference we've made and how far we've come in the past year."

While the Sandhills Care Center currently serves 17 residents and continues to increase its numbers, the need for a new facility is under serious consideration.

Leanne Maxwell serves on the center's board of directors, its fundraising committee, and the Brown County Community Foundation Fund. She has been the nurse at Ainsworth Community Schools for 18 years and was the director of nursing at Ainsworth Care Center before that.

"It is imperative that we continue to work toward building a new facility," Maxwell said. "But we need to show that we can continue to grow, improve and serve an increasing number of clients.

“It's not just the residents and the employees who are affected by our progress. We all benefit from one another. The clinic, the hospital, physical therapy … all of these services are part of the health care continuum."

Maxwell and Rucker agree that Sandhills Care Center has made great strides toward improvement, but the reality is that building is old and will soon be outdated.

So, fundraising for a new building has begun, and more than $300,000 already has been raised. Another $50,000 is committed from Brown County Community Foundation Fund for enhancements once the project is completed.

Community leaders plan to eventually seek a new private owner for the center.

Having a leadership structure in place to address emerging issues, such as the closure of a key health care facility, is an essential ingredient to community success. The Brown County Community Foundation Fund played an important role in reacting to this community crisis early on, and continues to be a primary partner moving forward.

"The Sandhills Care Center is of vital importance to health care services in the area," said Jerry Ehlers, a volunteer with Brown County Community Foundation Fund who serves on its current endowment-building campaign. "The funding assistance provided through an unrestricted endowment stands as an outstanding example as to how we can become a major player in addressing a fundamental community need."

Through the years, Brown County Community Foundation has reinvested nearly $140,000 — $35,000 in 2017 alone — in projects and programs that have benefited people of all ages in Ainsworth, Long Pine, Johnstown and the surrounding area. Grants to the library, fire and rescue, youth entrepreneurship, community beautification, arts, culture, and of course, significant investments in health care for all stages of life.

"We are closing in on the goal of raising $500,000 to earn a $250,000 challenge grant. When completed, the foundation fund will have well over $1 million in unrestricted endowment to provide ongoing support for critical needs throughout the county," said Al Steuter, challenge grant campaign chairman.

No one in Brown County wants a repeat of an episode like the closure of a skilled nursing facility. Thanks to ambitious leaders and considerable discretionary funding, the community is poised to face up to every challenge and take advantage of every opportunity.

Trump, 3M clash over order to produce more face masks for US

President Donald Trump said Friday his administration will try to stop “profiteers” from exporting medical protective gear, shortly after picking a fight with manufacturing giant 3M, a major producer and exporter of face masks used to protect health care workers from the coronavirus.

Faint glimmers of hope as virus deaths appear to be holding

NEW YORK (AP) — The steep rise in coronavirus deaths in New York seems to be leveling off in a possible sign that social distancing is working in the most lethal hot spot in the U.S., the governor said Monday — a trend that appears to have taken hold more convincingly in hard-hit Italy and Spain.

For millions of people, Easter morning church services are the highlight of the year. They look forward to the celebration of Jesus’ resurrection from the dead, which is announced by trumpets and celebrated with songs and takes place in a church sanctuary festooned in white and filled with f…

Three people were arrested in connection with various charges following a report of trespassing Saturday morning.

O’NEILL — North Central District Health Department (NCDHD) officials said they would like to address growing concerns to the community of Cherry County due to the notice of the first positive COVID-19 case in the county.

Trump, 3M clash over order to produce more face masks for US

Faint glimmers of hope as virus deaths appear to be holding