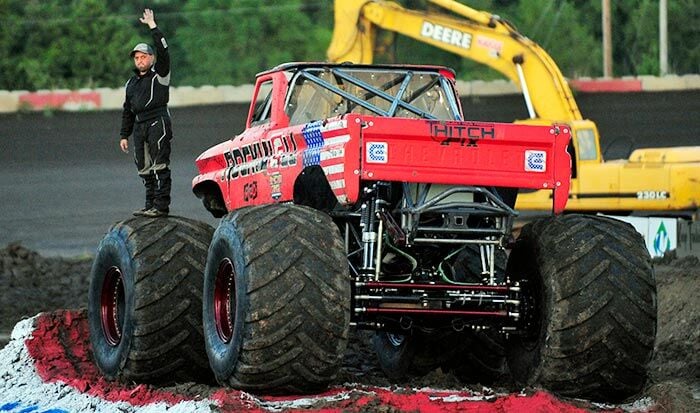 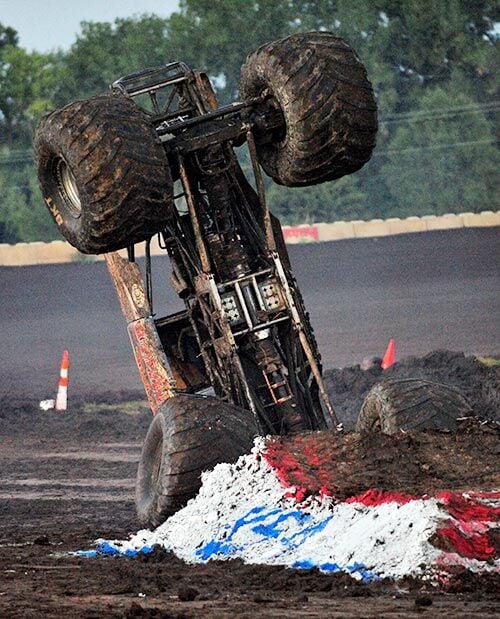 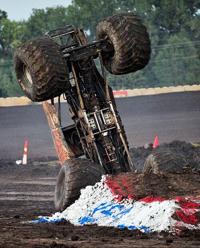 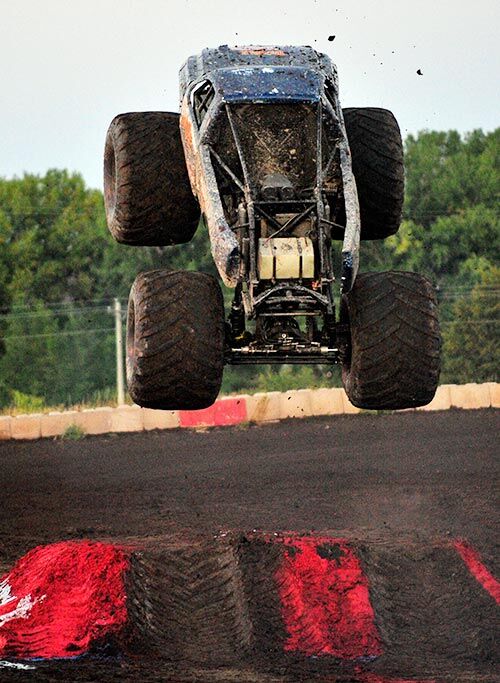 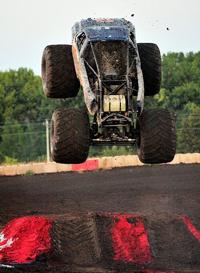 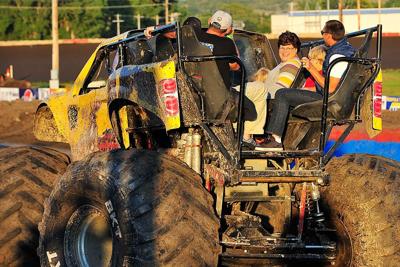 Monster Truck Entertainment brought its Nitro Tour to the Off Road Ranch for two performances Saturday in Norfolk. The tour consisted of two large monster truck shows, including four trucks that competed in several racing and freestyle events.

In the photo above, driver David Olfert of Sublimity, Oregon, waves to the capacity crowd while standing on a tire of his monster truck named “Rockwell Red” during Saturday night’s finale in Norfolk.

Driver Travis Groth of Gig Harbor, Washington, gets big air off a ramp with his monster truck named “Trouble Maker” during their show in the picture above.

In the photo above, although it looks as though “Trouble Maker” is about to flip upside down, Groth has his truck under complete control while on the front tires during the Monster X Tour show.

Fans were able to go for a ride in a specially built monster truck made just for that — rides. It can accommodate up to seven passengers (one in the front and six in the back) who got to experience riding in the big truck and spinning a few “donuts” at both ends of the track before, at intermission and after the show.

Monster Trucks drew a crowd to Off Road Speedway near Norfolk on Saturday night. Catch some of the action photographer Darin Epperly caught at…

Virus cases rise in US heartland, home to anti-mask feelings

MISSION, Kan. (AP) — It began with devastation in the New York City area, followed by a summertime crisis in the Sun Belt. Now the coronavirus outbreak is heating up fast in smaller cities in the heartland, often in conservative corners of America where anti-mask sentiment runs high.

BERLIN (AP) — Parts of Switzerland, Austria and Germany were surprised by unseasonably early snowfall overnight, after a sharp drop in temperatures and heavy precipitation.

The mural decorating the back wall of Roxi’s Elegant Bridal in downtown Norfolk is one of three that will be completed before the snow flies.

The Nebraska Cattlemen Foundation and two affiliates in Northeast Nebraska have thrown their support behind the Nexus project to build new agricultural facilities at Northeast Community College.

A Wayne State College faculty art exhibit is scheduled to open in early October and will display diversity in media, inspiration and theme.

There are some groups attempting to stop the Keystone XL pipeline from getting preliminary work completed for its construction.

Virus cases rise in US heartland, home to anti-mask feelings

MISSION, Kan. (AP) — It began with devastation in the New York City area, followed by a summ…

BERLIN (AP) — Parts of Switzerland, Austria and Germany were surprised by unseasonably early…