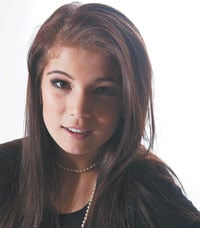 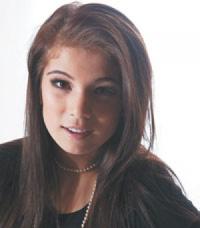 Katelyn Pippy stars in "Army Wives," but the 17-year-old will also play Division I hockey when she enrolls in Cornell. Become a fan of Katelyn's.

Katelyn Pippy stars in "Army Wives," but the 17-year-old will also play Division I hockey when she enrolls in Cornell. Become a fan of Katelyn's.

Everyday is a drama when you’re a teenager, but for Katelyn Pippy, she’s making a career out of it.

As Emmalin Holden on the Lifetime television drama “Army Wives,” Pippy has become the sometimes bratty but always interesting teen who more than 3 million viewers welcome into their homes at 9 p.m. during the spring.

At 17, she’s not only a main character on a highly successful television show, but she’s also a recent high school graduate who will play Division I hockey in college.

“You can’t even imagine the looks I get,” Pippy told the Daily News during a recent interview from Los Angeles. “Like acting, (hockey is) just what I do.”

While Pippy guest starred on several TV series before “Army Wives” — including “Monk” and “The Suite Life of Zack and Cody” — this wasn’t Pippy’s first opportunity at landing a big role. She was runner-up to Miley Cyrus for the “Hannah Montana” lead.

“Hannah Montana” has become one of Disney’s most popular shows and created a lunchbox-selling conglomerate, but the role may not have offered Pippy the diverse creative opportunity she has now.

“That was really a different time in my life. I was 12 years old. I do think things happen for a reason. I don’t know if I’d say it’s a blessing, but it was a different opportunity and a different path,” she said. “I know what I wanted my career to look like. Both were different situations, but handled correctly, ultimately, both could have gotten me where I want to be. It was a different way to get there.”

Pippy — originally from Pennsylvania — joined the cast of “Army Wives” for season two, replacing actress Caroline Pires. Then a reoccurring role, Pippy added so much depth and drama to the character that by the third season, she’s been a main cast member with her own subplot. Lifetime will return for a 13-episode fifth season in 2011.

While Pippy said she hasn’t been told what Emmalin will encounter this year, she does see a lot of similarities between herself and her character, although she’s just as quick to point out the differences.

“We're very different people — her and I — but there are some similarities in situations where we handle them,” Pippy said. “She was brought up very well in her family, and I was too. A lot of the reactions she has, I would have, too.”

The role has allowed Pippy to experience things she would rather not live through, like that teenage rebellious phase. In the third season, Emmalin caused quite a bit of trouble, which Pippy said was a lot of fun for her, even if it meant people kept telling her how mean she was.

But the role certainly has its perks. By playing the daughter of Emmy-award winner Kim Delaney and Brian McNamara, Pippy has the opportunity to learn from incredible actors on a daily basis.

“About 60 percent of my scenes are with them — at least. The main thing I've learned is to always be prepared and always be gracious to people around you and the crew members,” she said. “Respect people around you, and they'll respect you.”

Pippy said just being a regular on the show created an excellent learning environment because she can see the whole process and what it really takes to create the series.

“Army Wives” cast Pippy in an unusual age —her own. While most 17-year-olds are playing tweens and most 26-year-olds are cast as age 17, Pippy is literally acting her age.

Just like her character, Pippy has been thinking about college. While she’s decided to take a year off to audition for various roles that won’t interfere with “Army Wives,” Pippy said there’s nothing that will keep her from enrolling in Cornell and fulfilling her commitment to play hockey.

“College is really something I took a long time to consider. I could have gone to NYU or UCLA or somewhere I could have continued my acting, but I love Cornell. That’s where I want to be,” said the 5-foot-9 goalie.

When Pippy was younger, she wanted to be two things – a Division I hockey player and a comedic actor. She’ll fulfill the first goal next year, as for the comedy, it’s really drama that has won her heart. But just like everything else with acting, Pippy isn’t afraid to step out of her box.

“I love what I do, no matter that role I’ve been in,” she said. “I’m exciting about acting, and if there’s anything I think I can’t do, then I will. Well, within a certain limit, considering the class of it.”

Cyber Monday sales should be robust but business cooling

THE HAGUE, Netherlands (AP) — Cases of the omicron variant of the coronavirus popped up in c…