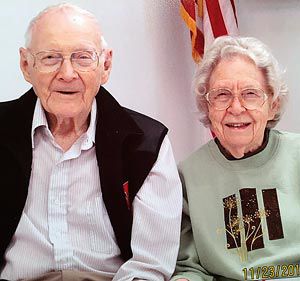 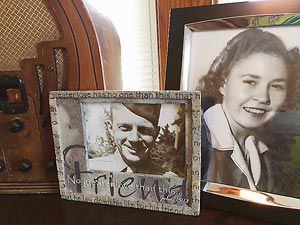 Clair and Lura were married on Aug. 23, 1941, less than four months before Pearl Harbor was attacked. Pictured is the photo of Lura that Clair carried with him during WWII, where he served as sergeant of an anti-aircraft gun crew in the South Pacific. Also, in the picture is the radio on which Lura listened to news from the frontlines of war.

The couple farmed north of Wayne after the war, and later Clair worked at the Municipal light plant for many years and Lura worked in the office of Dr. Wayne Wessel DDS.

Today, the same courage that made Clair a leader during the war is getting him through a broken hip with determination and humor (i.e. after physical therapy “they should NOT call this a rest home!”) And today the same girl who wrote to her soldier everyday while he was away, stands by his bedside and sleeps in a chair by his bed.

Nothing would please them more than to hear from people whose lives they’ve touched over the years. Thank you very much in advance for taking the time to send them a note!

The family of Stanley and Belva Acklie is requesting a card shower in honor of their 50th wedding anniversary on Dec. 29.

Glen and Kay Herbolsheimer will be celebrating their 50th wedding anniversary on Dec. 28, 2019. They were married on Dec. 28, 1969 at St. John’s Lutheran Church in Pierce.

Gerald and Linda Dahlkoetter of Norfolk will celebrate their 55th wedding anniversary with an open house on Sunday, Dec. 22, from 2 to 4 p.m. in the activity room at the Norfolk Veterans Home, 110 E. Benjamin Ave.

Ray and Joyce (Emory) Doerr will be celebrating their 60th wedding anniversary. They were married at Golgotha Lutheran Church in rural Wausa on Dec. 27, 1959.

Dean and Barbara Junck of Carroll will be celebrating their 50th wedding anniversary with an open house on Saturday, Nov. 30, from 2 to 4 p.m. at the Carroll auditorium. It will be hosted by their family.

The family of Walter and Darlene Sunderman of Norfolk is requesting a card shower in honor of their 60th wedding anniversary on Nov. 24, 2019.