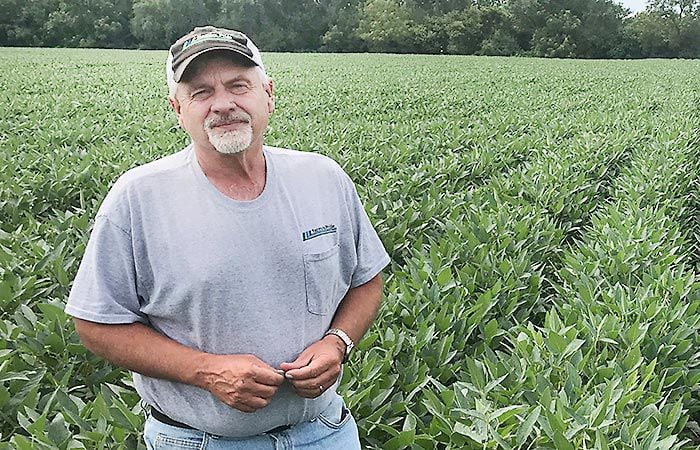 Pierce County farmer Steve Keck stands in a healthy bean field on Aug 12. The biodegrading rye under the soybean plants is filling the crop canopy with carbon dioxide from the respiring soil biology. 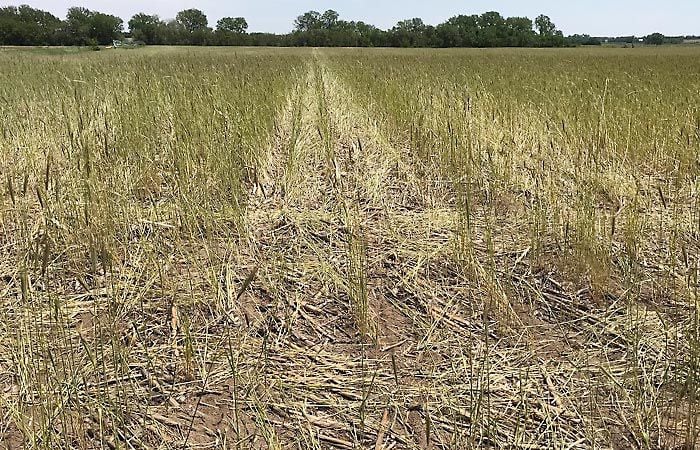 Pierce County farmer Steve Keck stands in a healthy bean field on Aug 12. The biodegrading rye under the soybean plants is filling the crop canopy with carbon dioxide from the respiring soil biology.

Anyone could agree that the 2019 crop season has been one of extremes. The Bomb Cyclone brought the incredible runoff event that led to thousands of acres of prevented planting. The wet weather persisted well into the planting season. Then in early June Mother Nature shut the rainfall spigot off on some folks while opening it wide on others.

Cover crops proved they have an ability to pull “double duty” this crop season. While the soil was too cool, wet and saturated to work or plant, the cereal rye covers that love that kind of weather kept on growing, using up that excess moisture, growing vegetative cover and root biomass, and drying out the soil so it could warm up and be planted.

How is that ground cover duty important? For those who caught the extra rainfall in June and July, the cover crop “armored” the soil surface with residue that deflected the impact of the rain drops and prevented detachment of the soil particles.

This allowed the soil surface pores to stay open to infiltrate and store the rainfall instead of allowing it to run off.

For those who had the rain spigot shut off, the cover crop vegetative biomass shielded the soil surface from direct sunshine that heats the soil surface up and reduced the wind that can evaporate moisture from the soil surface rapidly. This is especially important early in the crop season before the corn and soybean plants canopy.

Meanwhile, the below ground root biomass likely quadrupled in mass in the extra few weeks the cover crop grew, exuding plant sugars and feeding the soil biology. The roots of a 4-6 inch tall rye cover crop can extend 12-18 inches deep, while a 12-18 inch tall plant can explore up to three feet deep into the soil profile.

When the cover crop is terminated the roots die and begin to desiccate, shrinking as they degrade. This creates a channel for water to penetrate and move into the topsoil. The drying roots re-hydrate during a rain event and slow the movement of the soil water through the profile, making it available to the cash crop plant roots for a longer period of time.

In coarse, sandy soils the ability of the cover crop root biomass to slow down and hold on to soil water is an important duty the cover crop performs. The coarse soils contain less organic matter, so the cover crop roots don’t biodegrade as quickly, creating a soil sponge effect that benefits the sandy soils longer into the season. The plants get a few extra days shot at the water and more importantly the nitrates that could otherwise leach into the groundwater.

Many of you have already had your cover crops seeded by broadcasting aerially or with a ground driven high boy spreader. The optimum time for seeding mixes that contain brassicas or legumes is past, as there isn’t enough biological time for them to grow enough to produce their desired effects. Cereal rye, triticale or wheat are still a good choice to go with later in the year as it will germinate at soil temperatures as low as 34 degrees and start growing early in the spring.

Plant “green” the next spring and let the cover crop grow a little longer and give it time to provide more of its benefits. If you have irrigation you can allow for even more cover crop growth as you are able to replace moisture used by the cover crop in exchange for the soil health boost the additional cover crop biomass provides.

Be thinking about planting cover crops as you prepare for harvest. Integrating cover crops into a continuous no-till cropping system will accelerate the formation of soil organic matter and save soil, water and time.

Contact your local NRCS office or the Lower Elkhorn Natural Resources District to obtain more information on cost share opportunities to put those “Double Duty” cover crops to work on your farm.

Crops are growing ahead of schedule despite a dry summer, according to the National Agricultural Statistics Service. For the week ending Sunday, there were 6.2 days suitable for fieldwork. Topsoil moisture supplies rated 15% very short, 33% short, 51% adequate and 1% surplus. Subsoil moistur…

One hundred twenty-eight dairy cattle were shown in the 21st annual Cream of the Crop Dairy Show at West Point Saturday.

One of the largest family-owned pork producers in the nation is investing $50,000 in the Nexus project at Northeast Community College.

Farm Bureau urges administration to get tough with China on trade

Nebraska’s farmers and ranchers stand to benefit from the United States-Mexico-Canada Agreement (USMCA), which went into effect Wednesday, lawmakers said.

GRAND ISLAND, Neb. — Husker Harvest Days has been canceled for the first time in its history, as a result of the COVID-19 pandemic.

The Elkhorn Valley Museum in Norfolk is closed after staff found an old military grenade in their stored items.

O’NEILL — North Central District Health Department (NCDHD) has been made aware of five (5) additional positive COVID-19 cases in the district,…

Listed below is the 24-hour rainfall in inches as of 7 a.m. Wednesday in area communities.

Pierce Fire & Rescue recently acquired a new airboat for water rescue operations. Staff reporter Cole Bauer met up with personnel from Pierce and Norfolk as they launched the boat for training on Wednesday evening.

Saturday's gathering near CVS at the intersection of 13th Street and Norfolk Avenue to protest racial inequality began in the mid-morning and is expected to last until about 6 p.m.