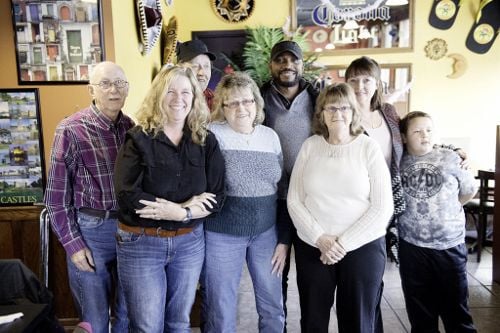 Miranda Lambert's MuttNation Foundation was created to raise awareness for shelter animals and to provide them loving homes. This holiday season, MuttNation is teaming up with Petmate for unique pet collections, which benefit the organization.

When Terry Farrington sent a Facebook message to country singer Tony Jackson on Monday, she wasn’t expecting a lot. Mostly, after a yearlong medical nightmare with her dad, she just wanted to take a breath and say thank you to the singer who’d helped get them through it, even if he had no idea he’d helped. Terry played him Jackson’s song “The Grand Tour” over and over during his five months in hospitals and a months-long recovery. Now home, her 74-year-old father still plays the song. When he read the message Jackson visited with them Thursday, wearing a favorite black ball cap and carrying two bags filled with gifts.

Lucas Hoge performed on Hallmark Channel’s “Home & Family” as he celebrates being featured on Amazon Original holiday playlist Acoustic Christmas.  Hoge’s original “Ho Ho Home for the Holidays,” which he performs on “Home & Family,” is available exclusively for streaming today on Amazon Music through Amazon Music Unlimited and Prime Music.

It just wouldn't be a true Thanksgiving without watching this classic WKRP clip.

Hey, guys: If you want to look more attractive to women, ditch the razor. A survey of more than 8,500 women shows that clean-shaven men don't cut it, and men sporting 10 days of beard growth are the most attractive.

We turn the clocks back this weekend, which means we get an extra hour of sleep on Saturday night. But the time change can still mess with you and make you feel more tired than usual. Here's how to prevent that . . .

Dumplin’, the movie featuring a new soundtrack by Dolly Parton, is coming to Netflix December 7.

How do I know that we taught our daughter right? She introduced us to Car Masters: Rust to Riches yesterday!

A website called Streaming Observer calculated which horror movie each state is obsessed with, compared to other states.

Carrie Underwood took control of the stage at the American Music Awards this week to perform a stark and emotional performance of “Spinning Bottles,” which she co-wrote with Hillary Lindsey and David Garcia for her new album, Cry Pretty.